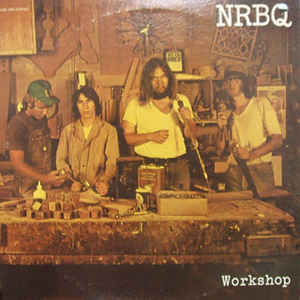 Big Al takes us through life post-NRBQ, becoming songwriter to the Nashville Hat Act Stars, and looks back to the tough days on the road with NRBQ.

AFTER A quarter-century of rock 'n' roll, it should be obvious that the idiom (if it can be classed as such) must be maintained by ...

AL ANDERSON, NRBQ's rotund bear of a lead guitarist, gave his meanest squint and chewed up the title line to his rollicking, vintage-sounding rockabilly tune: ...

The One And Only Combined NRBQ: Nothing Really Beats Quality

YEARS AGO, say 1968 or so, I was a snivelling adolescent who stole off outside the house to smoke Tareyton cigarettes. I often did shameful ...

AS THE perennial Little Bar Band That Could, NRBQ occupies a special niche. After all, they've existed in basically this form and with basically this ...

SEEING NRBQ play in a club for the first time is a little like sauntering into an amusement park with all-new rides — you're happy ...

NRBQ: Grillin' At The Roadside

AFTER 20 YEARS, and typically without fanfare, NRBQ has gotten around to releasing their first live album, God Bless Us All, and first career retrospective, ...