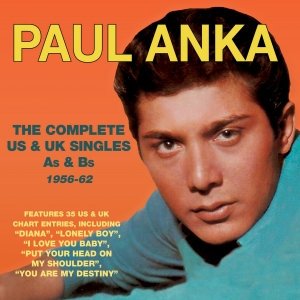 DO YOU HAVE trouble thinking of Paul Anka as anything but a greasy Italian dork from Brooklyn who whined his way adeniodally through a series ...

The Rebirth Of Paul Anka

FIRST OF ALL there was that punky Canadian kid with the big voice and the tremor that even got to me ("Put your head on ...

Songwriter, keyboardist, arranger, member of the Doobies and owner of The Voice reveals himself as a somewhat reluctant superstar. Thrust into pop music's center stage ...

No 'bout a doubt it, Mr. A has shaken a lot of action. He cut his first hit, a nifty nine-million seller, at fifteen, wrote ...

Paul Anka: Vegas Style – The Best of the Late RCA and Buddah Recordings

WE CATCH PAUL Anka in one of life's in-betweens. He had been one of the biggest stars of the '50s and would spectacularly resurrect his ...

Paul Anka's enduring work has ranged from Sinatra to Nirvana