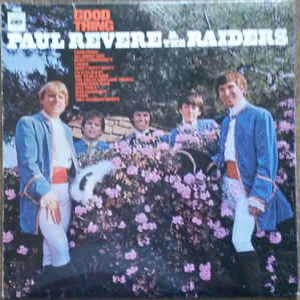 WATCH FOR the world-wide ride of Paul Revere! ...

STONES SHOW WAS REALLY A ROCKER ...

Tall Tale of Paul Revere Not to Mention His Raiders

SIXTEEN YEAR-old Paul Revere tossed a typewriter out of the window, thusly realizing his youthful ambition to get expelled from school. ...

The Raiders On The Run

THEY'RE RUNNING... running... RUNNING faster every day; longer every night; farther with each week and month; and still they go on running. ...

Will they start a store together? Maybe a diner or a hockey team, or mow lawns? Naw.... because the other day we were sitting on ...

It always happens. Just as we finish interviewing a group, a bunch of guys quit and we're left with worthless stories. The Mama's and Papa's ...

Though the folk-rock era ended his pop music dictatorship, there are signs Dick Clark is inching his way toward the center of the scene again. ...

IF THERE ARE still any doubts in your mind about the deterioration of AM radio (pop music's most immediate barometer) since, say, 1966, a glance ...

"WHILE STILL in his teens Paul Revere was running a drive-in theatre and two barbershops in Boise, Idaho. One night while listening to a combo ...

MIDDLETOWN, OHIO – As the car clanks over the first peak of the Screaming Eagle rollercoaster, poised to begin its exhilarating hurtle downward, I have ...

Paul Revere and the Raiders

Retrospective by Tom Hibbert, History of Rock, The, 1982

Paul Revere & the Raiders: From Batman to Manson

WITH THEIR BRIGHT Revolutionary War-style outfits, tri-cornered hats, and energetic antics, Paul Revere and the Raiders were certainly one of the most visual pop/garage rock ...