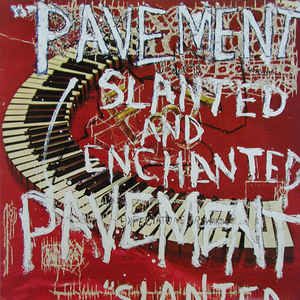 WE SHOULD HAVE seen it coming, really. While other leading practitioners of lo-fi American rock – Beck, Sebadoh, Royal Trux, The Grifters, Guided By Voices ...

The Pavement front man talks about the avoidance of self-consciousness and planning; their live capabilities; the recording process; his and Scott Kannberg's respective roles in the band, and the curious band dynamics; the seriousness of their fans; his move to New York, and the curiosity of a band where everyone lives in different places.

Messrs. Malkmus, Kannberg and Ibold on the making of the Terror Twilight album, working with Nigel Godrich, the ins-and-outs of the band... and the future of rock!

CURRENTLY THE focus of much cultish enthusiasm, Pavement exemplify all that's groovy and all that's grievous about American underground rock right now. ...

The post-Nirvana deluge of grunge guitar bands is threatening to stifle rock. Only a handful of genuine mavericks and freaks are holding out against the ...

Fasten Your Safety Belts And Assume Crash Positions. We Are Now Entering The Terminally Strange World Of... Pavement

Their brilliant abstract guitar pop has lit up the year like a beacon of unpredictable genius and their new 'Watery, Domestic' single is another glorious ...

For bands and fans, the single is the new format of choice ...

PAVEMENT have mutated from being the weirdest band on Planet Pop to the '94 version of Easy Listening Gods, Steely Dan. EVERETT TRUE meets mainman ...

THERE WAS MUCH wailing and rending of hair throughout the land at the news that Pavement had parted ways with their crazed 40-something drummer Gary ...

Pavement practice the art of falling apart with wrecking-ball rock 'n' roll and an apologetic postmodernism ...

AS AN AMERICAN, what do you think of the sex scandals that are sweeping British politics? Does it matter If an MP gets his rocks ...

FOR A BAND that is decidedly reticent about the prospect of mass exposure, Pavement are awfully good at getting it. In their earliest days, when ...

PAVEMENT are the Lords of Lo-Fi, the Sultans of Slacker. They hate Smashing Pumpkins and their songs are unlistenable chunks of abstract strangeness. Basically, they're ...

THINK ABOUT IT. A band works years to learn its instruments, play out, record, suffer the blows of fortune, regroup, play better than ever — ...

Bands from Sonic Youth to Pavement have turned Easley Recording into the new lo-fi capital. ...

THERE AREN'T many Australian tours with Texas on the itinerary, but leave it to Pavement's Stephen Malkmus to figure that America's Western states are, like, ...

IT'S DECONSTRUCTION time again. Right now, there's a sophomore somewhere hunkered down on the floor of his dorm room, a cigarette in one hand and ...

INDIE CRED. It's tough to acquire, but it's even harder to hang onto. Take the case of Pavement, a band boasting a distinctive guitar-based sound ...

Across the Cracks: Pavement

WHAT DOES A defiantly anti-corporate rock band do when it starts getting too much attention? In Pavement's case, they recoil. ...

They're the masters of American underground rock. Blur kneel at their lo-fi altar. So why is Pavement's new album a homage to cricket and darts? ...

NOBODY COULD accuse Pavement of being rock archetypes. Take the group’s frontman Stephen Malkmus, who spends much of his spare time flyfishing virgin rivers and ...

Pavement turn down the noise and open up their hearts, sort of.  ...

TERROR TWILIGHT'S penultimate track is a five and a half minute epic called 'The Hexx'. It begins with Stephen Malkmus taunting one of the swallows ...

Pavement aims for wider appeal — but with just a few pop concessions on its own indie terms. ...

Since lo-fi gods PAVEMENT have a passion for horse racing, we take them to the local William Hill for some gambling tips... But is everything ...

Preston School of Industry: All This Sounds Gas (Domino)****

PAVEMENT FOUNDER member emerges from dark side of the Malkmus to release solo project, whose name derives from San Francisco-area reform school ...

PAVEMENT MAY have been alternative rock's most notorious mess, but this deluxe reissue of their best album, appended with nearly forty extra tracks, illuminates one ...

Review by Will Hermes, Spin, December 2004

Pavement Get Back On The Horse

Pavement's reunion tour is a gamble in more ways than one — especially for its horse-racing drummer ...