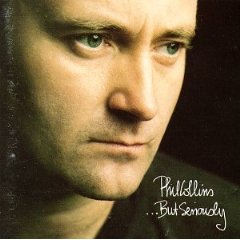 SET IN THE STOCKBROKER belt 30 miles to the southwest of London, the Genesis studio complex is exactly what you might expect: several thatched, suitably ...

The balding, tub-thumping thespian talks about his latest album, Both Sides; his development as a songwriter; his solo career vs. Genesis; his acting career; Live Aid; ambitions and collaborations, and on drumming and drummers.

The Trick of the Tale: Phil Collins Talks

PHIL COLLINS IS A spry, restless man with seemingly limitless amounts of energy and intense drive. It is this drive that has made him one ...

URPASSING even The Hitchhiker's Guide To The Galaxy and Crossroads in the bus-stop yapping stakes, the national adult pastime of watching Tiswas every morning of ...

At Home With The Stars Special: So Tell Us Phil, How Do You Feel About Solo Success?

Phil Collins Does Everything Better Than Everyone Else

THINGS SEEM to be going poorly for drummers of late, what with Buddy Rich undergoing bypass surgery earlier this year and a regular series of ...

PHILIP BAILEY used to sing with Earth Wind And Fire. Now he's teamed up alongside Phil Collins to reach Number One with 'Easy Lover'. SIMON ...

The Second Coming of Phil Collins

Philip Bailey: View to a Phil

WATCH OUT — PHILIP BAILEY IS AN ANGRY YOUNG MAN. PAUL SEXTON PUTS DOWN THE ARGUMENTS IN BLACK AND WHITE. ...

Does PHIL COLLINS keep up the tradition and slot into the file alongside Ringo and Keith Moon – tub-thumpers and "silly" actors both? LEN BROWN ...

• He leaves the toilet seat up! He does stuff in the privacy of his own house! He's worth 22 million! He's not a rich ...

Phil Collins: I Don’t Look Like a Sex God

By his own admission Phil Collins is an unlikely superstar. He’s the drummer turned singer, the background boy become celebrity, the chap next door gone ...

IN A REVIEW of Phil Collins' latest album, ...But Seriously, J.D. Considine wrote that Phil was more fun when he was frivolous. That's where Phil ...

Drummers: Adventurers in the Skins Trade

BASICALLY, UNCOOL, £12-million-a-year, Tory-endorsing Phil Collins is good on Love, not much cop on Life. So although, for reasons unknown, the totally solo Both Sides ...

Phil Collins: This man must be stopped

Stop up your ears. Unplug the radio. Phil Collins is back, with an Oscar-winning song, a tribute album, even a high-profile lawsuit. Tom Cox prays ...

His Turn to Testify: An Exclusive HITS dialogue with Phil Collins

JUST WHEN IT SEEMED like Phil Collins was ready to kick back and relax with his new wife Orianne and his 14-month-old son Nicholas in ...

Phil Collins Goes Back to his Soul-Music Roots

JB: Your new album, Going Back, quite literally goes back to your musical roots. So where did you first start to become interested in music? ...

TO DESCRIBE No Jacket Required as an era-defining album is almost an understatement. ...

Seventies prog rockers Genesis are back, but are they welcomed?

Retrospective and Interview by Nick Hasted, The Independent, 10 October 2014

THE SIGHT OF Peter Gabriel, Phil Collins, Tony Banks, Mike Rutherford and Steve Hackett lined up in a studio, albeit only to reminisce for a ...