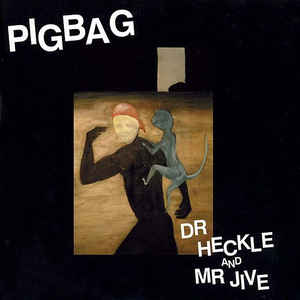 Adam Kidron: The Man Behind the Mix

THE ACREAGE of cloth in Pigbag's collective trousers has been measured and, I'm afraid, found wanting. This is, apparently, an issue of some importance in ...

BLOW ME down and shake me round, here comes Pigbag, a tornado in your town. Yes, yes a breath of fresh air designed to move ...

"WELL, I BEGAN with alto sax. Then I started playing more and more guitar and less sax; then I did more percussion because we ...

PIGBAG ARE 'HOT' at the moment and so are the audience — very hot. The Warehouse Club (originally a real warehouse and cosily underground like ...

BOTH OF these docile records stand or fall as assemblages: their creators propose to be organisers of sound, something more than itinerant pop musicians. ...

PIGBAG surprised everybody, not least themselves, by climbing into the American charts and subsequently the British ones in 1981 with 'Papa's Got A Brand New ...