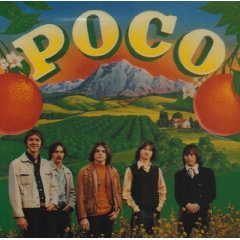 Poco: One Of The Great Mysteries Of Rock

Five years and six albums after they formed Poco remain one of the great mysteries of rock and roll – a band who have lurked ...

POCO IS THE only rock 'n' roll band I've ever seen whose members smile as they sing - it's hard to grin with your mouth ...

Poco: A Good Feelin' to Know

I'VE JUST come home from seeing Poco play. They were terrific, significantly better than the last few times I heard them in concert. ...

I FIRST got into Poco back when Buffalo Springfielders Richie Furay and Jim Messina were still in the band. They cut a live album, called ...

THE SUDDEN relaunch of Poco has kicked up some pretty weird conversations and ironies. For few former Poco buffs are willing to believe that Head ...

RICHIE FURAY has been one of the guardian angels of rock music over the past five years, coming to the fore in 1969 when he ...

POCO’S TIM Schmitt and Paul Cotton were asked whether Richie Furay would have the band to play on the same bill as Loggins & Messina, ...

The World Still Hasn’t Caught Up With Poco

WHEN GEORGE GRAHAM, THE quiet member of Poco, opined that a hit single would really get Poco away as far back as the Summer of ...

ZIGZAG HAS FALLEN into the habit of reviewing Poco albums with trepidation. With each new Poco release Andy Childs, an old Poco buff himself, passes ...

INITIALLY THE main difference between these two progeny of the Buffalo Springfield is one of sophistication. While Poco strive desperately to recapture past glories, Loggins ...

I KNOW a lot of city-boy cynic rock writers like to put down this band, pointing out how lightweight they are and how they come ...

NOW I'VE been told by no less a figure than our editor that this is a mighty fine album and I know it means kneecap ...