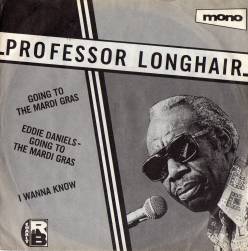 I HAVE immense admiration for Professor Longhair ...

ALL RIGHT, ALL RIGHT. Gather round, all you fans of the Shuffling Hungarians, the Four Hairs, the Blues Scholars, and the Blues Jumpers, 'cause 'Fess ...

Professor Longhair: The Professor of Rock

THE PROFESSOR, THEY SAY, influenced just about every musician in New Orleans. And it’s not a claim he’s about to deny. "I taught most of ...

Solo YarrowPETER YARROW would appear to have shed all semblance of times past when he fronted an all-electric group at Max's Kansas City on Park ...

Mick Brown talks to a survivor ...

Professor Longhair: I'm A Little Rowdy With My Playing

I HAVE immense admiration for Professor Longhair. ...

An Interview with Professor Longhair

MAKE NO MISTAKE about it, New Orleans R&B would not have been what it is without Professor Longhair, Henry Roeland Byrd, and there are some ...

MOST ROCK fans have never heard of Professor Longhair, but lots of their favorite musicians certainly have. The New Orleans-based piano I player, who died ...

I don't know who runs Nighthawk Records, but I'll nominate them for immediate induction into the Hall of Fame wing at the College of Musical ...

You don't have to be addicted to New Orleans piano style to savor the rich portrait of Stevenson Palfi's Piano Players Rarely Ever Play Together ...

AHH, YES, THE virtues of the repertoire.Admittedly, it's a foreign concept these days, when artists are almost universally expected to write and perform fresh material ...

Previously unreleased live set of the New Orleans R&B pianist at his best. ...