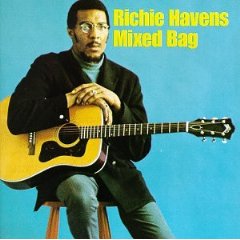 LOS ANGELES — For a long time Richie Havens only belonged to New York, now he will belong to everyone. Havens opened on the West ...

A PERFORMER can be fairly sure he is successful when record companies start releasing records he would rather forget. ...

Following Blind Faith to the shores of a lake ...

LONDON — take a sheet of thin cardboard. Sprinkle iron filings on top. Place a magnet underneath. All the filings will start and shift, and ...

VISITORS to the 2nd Isle of Wight Music Festival at Godshill near Ryde more than doubled the population of the Island, outnumbered the 130 local ...

RICHIE HAVENS, who has become one of the most important figures in folk music, performed at Philharmonic Hall last night. ...

Garden Thronged for Songfest In Aid of Vietnam Moratorium ...

THE SUBJECT OF Richie Havens is always sure to provoke an argument. Those who tend to dislike him do so with a great deal of ...

DON'T CONFUSE this with the soon-to-be-released Havens album, The Great Blind Degree. ...

The question of motion has developed into a trap of sorts since our entertainers became artists. Artists must continually grow and evolve, but invariably draw ...

ONE DAY WHEN it was raining, I swore a great and terrible oath. ...

IT WAS A folk-rocker's fantasy: R.E.M. was videotaping a concert for MTV broadcast in July, for a new series called Influences. And so the IRS Records ...

IT'S A VOICE you remember, possessing in its cavernous reaches the smoky essence of an age. ...

THE YEAR 1969, in rock music, was the culmination of the era of the huge outdoor concert festival. ...

RICHIE HAVENS'S LIFE hinged on Woodstock. His three-hour opening set at the festival, climaxing with 'Freedom', his anthemic improvisation on the spiritual 'Motherless Child', linked ...

Woodstock was a beginning, and it was an end. ...