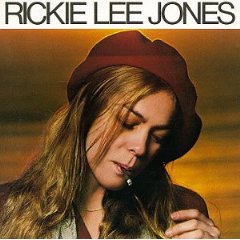 IT'S ALREADY well known how the great Casting Director in the sky limited women to a few suffocating roles in American popular culture: the mother ...

The boho queen talks about her covers album Pop Pop, songwriting and song choices, working with Don Was and her unlikely friendship with Scotland's The Blue Nile

Ms. Jones goes album-by-album, from her eponymous debut in 1979 to 2009's Balm in Gilead. The songs, the players and producers, and the whys and wherefores of each.

CHUCK E.'S IN business. Thanks to Rickie Lee Jones' hit single 'Chuck E.'s in Love', one of L.A.'s perennial hangers-out is emerging from the shadows ...

Rickie Lee Jones: Cocktails for Kerouac and an appointment with the Hype Machine

ABOUT THE crassest tag anyone has tried to hang on Rickie Lee Jones is that she’s "the female Tom Waits". It is also the kind ...

CHUCK E.’S IN the audience. Got up just in time for the show. No doubt Chuck E.’s also in love. He’s definitely in business. The ...

THE LONG cool sleaze of Rickie Lee Jones wafted through the Dominion Theatre with a balmy breeze that fulfilled the expectations of those who'd come ...

IS EVERYTHING AS wonderful as it seems in the current reiteration of the Song? ...

Rickie Lee Jones: Songs From a Bohemian Past

RICKIE LEE Jones appeared out of nowhere in 1979 with a stunning self-titled debut album. The mysterious bohemian blonde — who comes to the Merriweather ...

On a rare visit from her new home in France, Rickie Lee Jones lays down her cutlass and beret to discuss the songwriter's art, dissect ...

IT SEEMS APT that Rickie Lee Jones's Girl At Her Volcano begins at a point near the end of her live set ("We love you!" ...

For song, as sung by you, is ... notWooing of something finally attained.Far other is the breath of real singing.An aimless breath. A stirring in ...

The World According to Rickie Lee Jones

RICKIE LEE JONES is telling a story on the radio: "In the dreamscape where you write, there are people who shadow you. Like I have ...

Profile and Interview by Mark Cooper, The Guardian, 25 October 1989

Shot to stardom 10 years ago, Rickie Lee Jones has fought her way back – no less cool but much more confident. Mark Cooper reports ...

Flying Cowboys simultaneously bears the distinctive mark of Rickie Lee Jones's wild, unruly talent and continues the steady process by which her art is achieving ...

AS ANY OF the fans who have helped to sell out her shows in London and Glasgow this weekend will know, Rickie Lee Jones likes ...

RICKIE LEE Jones continues on her own singular way, making records which will not reap her the Four Non Blondes audience, will not return her ...

Rickie Lee Jones: The War Of The Berets

IT HAS BEEN 18 years since Rickie Lee Jones breezed in with the eccentric bop of 'Chuck E.'s in Love'. A one-hit wonder on radio, ...

Keeping Up With Rickie Lee Jones

SINCE HER 1979 emergence, Rickie Lee Jones has always whipped myriad influences into her own musical blender. Now she's turning the tables. ...

"EVERYBODY," Rickie Lee Jones sang on her 1997 album Ghostyhead, "starts out pure, starts out ridiculous, starts out beautiful..." And then? And then, says Jones ...

RICKIE LEE JONES is something of an anomaly. Her latest album, It's Like This, has just been nominated for a Grammy – but how many ...

Rickie Lee Jones: The Evening Of My Best Day

Cherished US singer-songwriter back on form ...

NINE MUSICIANS stroll on to a stage packed with stringed instruments, keyboards, horns and percussion. Four of them are wearing hats, and under the coolest ...

Profile and Interview by Andy Gill, The Independent, 16 January 2004

Rickie Lee Jones has always had her demons - and now she's living in the America of George Bush and Jeffrey Dahmer. ...

YOU KNOW WHEN someone announces they're off their face on drugs, and after that, whether they're joking or not, you notice something a little askew ...

THOUGH SHE will always carry the pop albatross that was her Top 5 hit 'Chuck E's in Love' (1979), Rickie Lee Jones remains one of ...

RICKIE LEE JONES isn't someone readily given to nostalgia. In a career that's now into its fifth decade, she's rarely looked back, preferring instead to ...

FIRST, A HEALTH WARNING: if you are prone to cringe, foam or rage at reviews that put emotion first and last, and make no attempt ...

Rickie Lee Jones: So Many Roads

OVER UNDERSTATED, PERCUSSIVE ACOUSTIC GUITAR and the barely-there, spectral drone of an ancient organ, the voice of Rickie Lee Jones seeps like water from a ...

LITTLE OVER A MINUTE into her funereal version of 'St James Infirmary', Rickie Lee Jones lets out a sudden cry of anguish. Such is the ...

AS HER TOUR BUS heads across Texas on the way to the Kessler Theatre in Dallas, a song that's been running around inside Rickie Lee ...