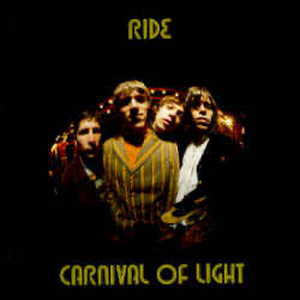 Andy Bell and Mark Gardener talk about why they've reunited; explore the nature of noise, abstraction and the blend of guitars; being back on tour, and singing songs written in their teens at 40. Oh, and they play, unplugged, a couple of tunes!

In The Land of The Riding Sons: Ride: Boardwalk, Manchester

"TALLULAH GOSH and some bloke from Supertramp" — this is the grim musical history of Oxford according to Ride. ...

Three months ago, no one had heard of Ride, yet now they're fast becoming the most sought-after band in Britain, providing positive proof that music ...

BEFORE WE start, one thing: 'Dreams Burn Down', eh? What a stormer! Breathtaking, sickening, walls collapsing all around you and oh look the gazelles are ...

At the beginning of the year, RIDE were almost unheard of but a series of brilliant records and an old fashioned slog around the country has ...

RIDE, perhaps, are just too much. Too soon, too quick, too assured, too contemporary, too praised, too openly derivative to even be insulted by being ...

Ride: Riding The Crest Of A Wave

After a year as top indie kids, RIDE have crossed into the mainstream and are now steaming into the Top 20 and selling-out all their gigs. ...

THIS YEAR, THE most popular phenomenon in British alternative rock is a wave of hazy neo-psychedelic guitar groups. ...

Ride: Sex And The Singles Band

We Can Be Zeroes: Ride: Going Blank Again (Creation)

AND YOU THOUGHT Nowhere was one of the worst album titles of all time! You almost have to hand it to them for having the ...

YOU KNOW the future has arrived early when Ride make mincemeat of the whole sorry teen-pop equation. ...

WHOO-EE. Really, you shouldn't have. As a gift to the world, Going Blank Again is a fully- fledged wow, a winner, a stunna, a glory ...

GROWING UP in public is the unhappy lot of any semi-competent British indie band and, as probably the most able floppy-fringed wan-faced contenders of the ...

As the man behind Curve, Ride, the Valentines, JAMC and more, producer ALAN MOULDER doesn't seem to be able to put a button-pushing finger wrong. ...

VISIONARY ART or nouvelle junk food? Perfect masters of evocative soundscapes, Britain's Lush and Ride can create a mood quicker than you can dim the ...

BOYS AND GIRLS. Musos and teenies. Schoolkids and scholars. Indie-bods and bank clerks. At the start of 1992, Ride attracted them all.  ...

A decade on from its inception, Creation rules the British rock underground. The 'Undrugged' party at the Royal Albert Hall, and the random singing of ...

Who will mourn RIDE, now gone the way of all flesh? Not NEIL 'Bites Yer Legs' KULKARNI, that's for sure ...

Retrospective and Interview by Jude Rogers, The Guardian, 27 July 2007

AT THE START of summer 2007 a supple, shimmery thread started darning itself through a long line of euphoric-sounding albums. From Maps to Blonde Redhead, ...

The festival market grows ever more crowded, but east London's clued-up shindig keeps getting it right, with FKA twigs, Patti Smith, Ride and many more ...

RIDE'S DISAPPOINTING COMEBACK album lacks the things that made them great. ...