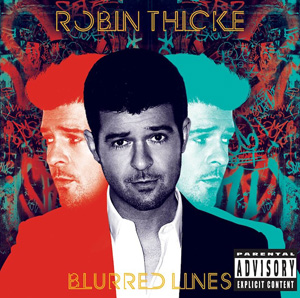 Impressions of sound: the thinness of Thicke. ...

JAMES TAYLOR'S early-'70s status as the king of sensitive male vocalists is mere VH1 countdown fodder now. Yet in 2006, more than a few male ...

WHATEVER ELSE Robin Thicke is, he's not the "next Justin Timberlake". Nor is he "going to change music", as claimed by his current mentor and ...

Robin Thicke: Something Else (Star Trak/Interscope)

THAT ROBIN THICKE is a gifted singer and songwriter was never in question; last album, 2007's The Evolution Of Robin Thicke made his talents abundantly ...

It's difficult not to view Robin Thicke as definitive proof of the age-old adage that sex sells. ...

IT'S AMAZING what one hit can do for an act's profile: Robin Thicke had laboured long and hard with little recognition outside the core US ...

Who is Robin Thicke?

WHATEVER YOUR thoughts on its icky sexist video of gyrating, semi-naked models, it is impossible to deny that the lascivious R&B throb of Robin Thicke's ...

The George Clooney of club jams calls in a crack squad of hitmakers for laid-back, top-shelf pop. ...

The Blurred Lines of Blue-Eyed Soul

ROBIN THICKE JOINS JUSTIN TIMBERLAKE, GEORGE MICHAEL AND ELVIS ON THE SOULFUL WHITEBOY TIMELINE. BUT IS IT CULTURAL APPRECIATION OR APPROPRIATION? ...

IT MUST BE STRANGE being Robin Thicke. There he was, bouncing along with a solid if unremarkable 10-year career in R&B and suddenly 'Blurred Lines' ...