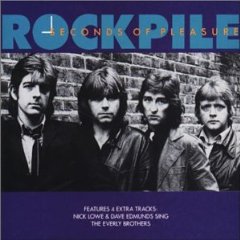 DAVE EDMUNDS HAS had his definitive quote on Nick Lowe's talents down pat for a long while now. "There are loads of guys around in ...

THE HEAVY rain outside did little to dampen the enthusiasm of the audience inside. With a majority of those in attendance being press and record ...

Rockpile: Rock Around With Philip Marlowe

THE TROPICANA MOTEL sits disconsolately on Santa Monica Boulevard in West Hollywood, an area that looks uncomfortable sandwiched in between the clinical sky-scrapers of Century ...

DESPITE THE eleventh hour location change, the Venue was packed. ...

Nick Lowe: Whatever Gets You Through The Daze

Rockpile: Strictly For The Laughs (so laugh, then)

THE ROCKPILE PHILOSOPHY AS TOLD TO DAVE McCULLOUGH ...

I GUESS I WAS almost prepared. The stories in the English papers portraying him as a garrulous kinda guv, the bashful puppydog picture sleeves on ...

Heatwave Festival: Crouching Towards Bowmanville Or Elvis: What Happened?

I MUST confess to hating "rock festivals" with some passion. My response to the rhetorical "Would you have gone to Woodstock?" question has always been ...

Seconds Of Pleasure, Years Of Drinking: Rockpile Wakes Up Early

LONDON – Having never been in London before, I suppose I should feel some shame at spending my first night in a comfortably Americanish club ...

THEY CALLED it rock, and boy, did Britain’s Rockpile rock-brashly, boozily, and in one regard, too, belatedly. ...