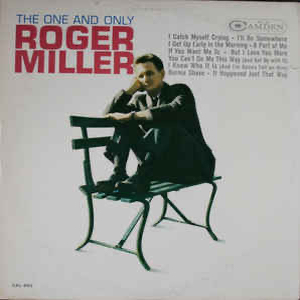 "England swings like a pendulum do.  Bobbies on bicycles, two by two.  Westminster Abbey, the Tower, Big Ben;  The rosy-red cheeks of the little children." (Part ...

WITH THE Old Year now just a part of history, there is one man in this world of pop who must undoubtedly have been quite ...

Stars Turn Out For Grammys: Standing Ovation For Herb Alpert

HOLLYWOOD: In the finest tradition of glittering Hollywood premieres and openings, the Eighth Annual Grammy Awards were presented in the International Ballroom of the Beverly ...

"A WOMAN'S place is in the stove," Roger Miller drawled over the babble of four housewives sitting behind him in a plush Encino restaurant. ...

Roger Miller: In The Red For Eight Of His Ten Singing Years

ROGER MILLER – both on and off record – has a quiet, relaxed, uncomplicated approach to his music and to life. Yet he's had 10 ...

BECAUSE ROGER Miller is such a good songwriter it's odd that only one of the tracks here is his own composition. It would be much ...