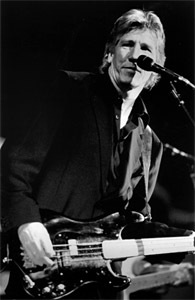 The former Floyd man discusses the problems of producing the upcoming Berlin production of The Wall: German Green Party demands that he plants lupins after the show; Soviet co-operation in using the Red Army Choir; trying to get help from the British military but not being allowed to use an army band, and all the headaches involved in such an ambitious production.

Roger Waters: The Pros And Cons Of Hitch Hiking (Harvest)

THERE IS a latent longing in many an English mega-rock star to become an intellectual seer, to splash garish helpings of philosophy and instructive comments ...

Roger Waters: He's Got The Technology

Profile and Interview by Jon Savage, The Observer, 12 July 1987

Over The Wall: An interview with Roger Waters

ROGER WATERS assumed leadership of the Pink Floyd in '68, turning them from a fringe festival attraction into the most popular touring group of the ...

Roger Waters: Out of Troubled Waters

Profile and Interview by Mark Cooper, The Guardian, 20 November 1987

Roger Waters now finds himself in competition with his one-time colleagues in Pink Floyd – he doesn't like it but there are compensations. Mark Cooper ...

RW: I did an interview a couple of years ago for a guy called Red Beard who worked for a radio station in Dallas and ...

This is a transcript of Martin's 1990 audio interview with the former Floyd man. Hear the interview here. ...

Roger Waters: The Wall In Berlin

They said it couldn’t be done. The most extravagant reconstruction of The Wall, featuring the most unlikely and impressive cast, the most immodestly proportioned props ...

YOU CAN TELL a lot about your view of Roger Waters by your reaction to those terms. As the creative force of Pink Floyd from ...

"MY BACKGROUND and my real musical desires lean far more toward Roger Waters than they do toward Madonna," Miss Ciccone's principal songwriter, keyboardist and MD, ...

Roger Waters: Who the hell does he think he is?

Which One's Pink? Roger Waters' In The Flesh

• Sony Music, 2000 • Written by Roger Waters and David Gilmour, in various permutations, with a little help from exPink Floyders Richard Wright and Nick ...

Roger Waters: Off The Wall

To some, Roger Waters is the reactionary ogre who destroyed Pink Floyd. To many others, he's one of the few truly intelligent voices in rock ...

The Last Days Of Pink Floyd

They called it The Final Cut, and that’s what it was for Pink Floyd – The last album they would make with Roger Waters. For the ...

IN JULY 1978, the members of Pink Floyd gathered at Britannia Row, their studio in London. It had been almost exactly a year since the ...