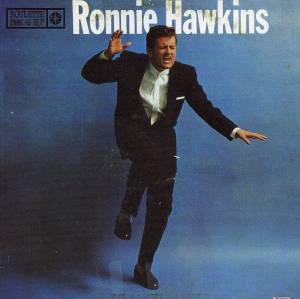 ROCK AND roll was the victory of regional locality over the world, of precise beliefs over general theory, of particular feelings over universal philosophies. ...

IT'S A TYPICAL Toronto Friday night. Hoods with greasy ducktail haircuts are dragging up and down Yonge Street, the city's main thoroughfare and girl-watching area. ...

RONNIE HAWKINS came down out of the Ozarks, and after gigging with Carl Perkins and Harold Jenkins (later Conway Twitty), he decided he wanted to ...

From Stud to Star: Ronnie Hawkins

TORONTO — Ronnie Hawkins, the Arkansas rock and roller now living on a farm near Toronto, has signed a long-term contract with Atlantic Records. Hawkins, ...

LIFE ON Yonge St. in Toronto, is a crackerjack maze of flickering neon lights, honking car horns and fast people. ...

IT'S A CRAZY album. If anybody remembers the '50s, they are thinking of a man who came out with some of the best hard rock ...

SUDDENLY THE world is hearing about Ronnie Hawkins. And all because John Lennon made him an international figure by staying at Ronnie's Canadian home for ...

TORONTO — The scene couldn't have been more appropriately peaceful if it had been staged by a film director. A color TV set flickered soundlessly ...

JOHN LENNON spent several days as a guest at Ronnie Hawkins' secluded country house in Canada prior to, during and following the peace concert. Yoko ...

Ronnie Hawkins: Plugging Along The Publicity Route, But...?

THE HAWK blew into town recently, spewing one-liners and hoping that his big mouth would bring him fame instead of trouble this time. ...

The Best of Ronnie Hawkins and the Hawks (Rhino)

Profile and Interview by Nicholas Jennings, Maclean's, 15 May 1995

THE BEER WAS flowing freely as waitresses served platters of breaded shrimp, gourmet pizza and chicken wings. But it was not the regular hockey crowd ...