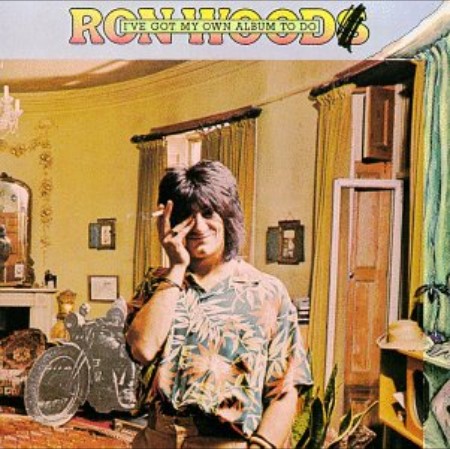 Ronnie Wood: I've Got My Own Album To Do

RON WOOD, whose role in the Faces has paralleled Keith Richard's function in the Rolling Stones, has put together what is less a solo album ...

WHEN TP FIRST interviewed Ron Wood, back in the fall of 1974, the Faces' guitarist and ex-Beckite was more than happy to answer questions about ...

From the Birds to the Stones, via Jeff Beck and the Faces, rock'n'roll's favourite scarecrow tells the whole story...

The tousled plank spanker on his new record, I Feel Like Playing; on getting sober and the break-up of his marriage; his solo career and his painting, plus encounters with Bob Dylan and jamming with the Yardbirds in 1964!

RONNIE WOOD'S always been pretty modest about his guitar playing. Mention how good it's got over the past two years and he tends to look ...

The Complete Works of Ronnie Wood

REMEMBER A BAND called the Birds? Nope friend, I do not mean the Byrds, Bobby Dylan's old honchos from Los Angeles, nor am I alluding ...

Ron Wood: I've Got My Own Story To Tell

Earlier this month Warner Bros released Ron Wood's first solo album, appropriately titled I've Got My Own Album To Do (K 56065), so we thought ...

IN A SMALL, homemade studio in the depths of Ron Wood's British home, an array of the most famous faces in rock gathered one night ...

Ronnie Wood: Is This The Face Of Violence?

WITH THE SUDDEN decisiveness of an eagle that spots its unsuspecting prey from hundreds of feet away, the Rolling Stones are touring North and South ...

BOBBY WOMACK is confused. Suffering from an overdose of in-the-studio-excitement and jet lag, he sits on the bed of his hotel room cubicle at Blake's, ...

Hey, this is good. Not good-despite-sloppiness like Wood’s earlier solo album, but unreservedly good. ...

MY H.A.L. PRINT-OUT on Ron Wood sez that his guitar-playing veers from the sublime to the ridiculous (i.e., his playing on Rod Stewart's solo albums ...

"HEY MICKIE BAAABY," a disc jockey screams loudly after playing 'Get Off Of My Cloud' for the third time that afternoon for the greater metropolis ...

DURING THE musically bountiful years of the late Sixties, the Jeff Beck Group emerged; it was an outfit of undisciplined nature and unabashed energy. ...

Ron Wood: Cast Your Fate To The Wind, The Faces, Or The Rolling Stones

THE MINI-CAB DRIVER was confused. "Ron Wood," he kept repeating all the way to Richmond. The name was familiar but it's origin was a mystery. ...

"WHEN bands have been around this long they should be dead and buried," Keith Richard mused. "But we're still here and you have to live ...

"IT'S IN THE contract, you know," says Ronnie Wood, trying to lock his features into a suitably stern Rolling Stones scowl. "You can't be seen ...

"WE CAN DO a lot more with this particular band than any other incarnation of the Rolling Stones," Keith Richard threatened during the Stones' 1975 ...

GOOD OLD Honest Ron Wood!! What a nice geezer, what a lad. Always a goofy smile with the everpresent Marlboro hanging from those humble lips, ...

WHEN TP FIRST interviewed Ron Wood, back in the fall of 1974, the Faces' guitarist and exBeckite was more than happy to answer questions about ...

AND WHAT a delightful pair they made, Bo 'Jesus' Diddley and Ron 'Not Exactly Picasso' Wood. The main difference between them, I suspect, is that ...

TO BE A Rolling Stone is a singular occupation. Last autumn, the phone rang at Ronnie Wood's Manhattan lodgings. Hello, it's Hillary Clinton. She said, ...

SANDWICHED BETWEEN the end of his days with the Faces and the beginning of his tenure in the Stones camp, Wood's second solo album was ...

"RONNIE WOOD was one of the first musicians I ever met," says Mick Taylor, seated deep in the murk of the 100 Club. "The Cherry ...

Ronnie Wood: "These men were dangerous…"

AUTHOR'S NOTE: This is my original version, as submitted to the magazine. ...