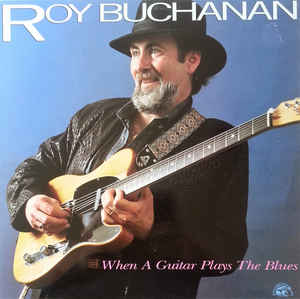 THE WORD is out and the message is self-explanatory. Buchanan, they say; Roy Buchanan, they mean. And if you've missed this paean that's currently ringing ...

An Oldie but Goodie: Roy Buchanan

Retrospective and Interview by Bill Millar, Let It Rock, July 1973

FREAKS MAY BE trading in their Rory Gallagher albums for those by the new, laid-back, spaced out, country Clapton, but 'Echoes' readers know better – ...

Johnny Winter: Saints and Sinners/Roy Buchanan: That's What I Am Here For

IT'S A SAD DAY indeed for guitar freaks when two of the best in the business turn out the spottiest albums of their careers. But ...

AS A TECHNICIAN alone Roy Buchanan is one of the finest electric guitarists in the world. ...

NOT MANY guitarists can say they were invited to join the Rolling Stones. Not many can say they turned the offer down either. But Roy ...

ROY BUCHANAN seemed to come out of nowhere in 1972 when a laudatory article in Rolling Stone was followed by his first album, but it ...

ROY BUCHANAN broke the mould. Usually the record comes out, then the articles follow, and then the concerts start selling out, and then there's ...

Roy Buchanan may be remembered as little more than a guitar player who achieved minor British chart success with 'Sweet Dreams' (#40 in 1973) and, ...