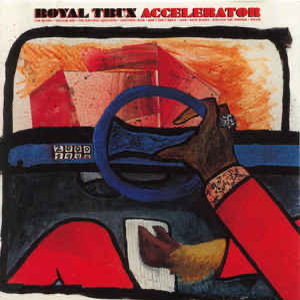 …IT WAS my (apparently erroneous) belief that Jon & Julia were the primary form-disrupters in Pussy Galore. ...

NEIL HAGERTY AND Jennifer Herrema are a tightly-tied 20th century Hansel and Gretel that the candy path led too far into the dark forest. Parts ...

ROYAL TRUX is as much a rock’n roll fairy tale as a musical ethos, a terribly incomplete story without the first chapter. This inspirational ...

Royal Trux: Blood On The Trux

In 1990, ROYAL TRUX released Twin Infinitives, a double album once described as one of the 'most hallucinatory avant-rock sprawls ever'. Then they got even ...

Royal Trux: It's All Chauffeur Now

They're the most notorious rock band on the planet. They're wilder than a starving lion. So how come ROYAL TRUX are afraid of pre-teen Washington ...

TONIGHT, EVERYONE wants to be a cowboy, a hustler, a rock'n'roll star. There's an accentuated swagger to the crowd; drinks are ordered and ferried with ...

Neil Hagerty and Jennifer Herrema, the "Glimmer Twins" of Royal Trux, have packed a lot of living into the past decade – including heroin abuse ...

ROYAL TRUX don't give a damn and don't care who knows it. ...

Pound for pound, the trailer park noise symphonies of Royal Trux out-weird everything this side of Ornette Coleman and The Grateful Dead. Edwin Pouncey travels ...

The next in a long line of re-issues from the back catalogue of Chicago grimy rock duo Royal Trux, 1998's Accelerator is back in print ...