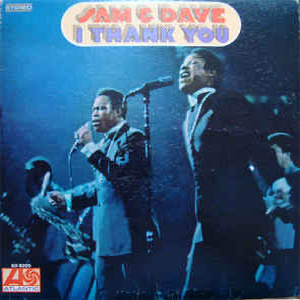 Getting together with Dave Prater; Atlantic/Stax; the Stax-Volt UK tour; meeting the Queen; working with Lou Reed: the Soul Man speaks.

It was perfectly clear that every performer on the Stax show was going to receive the most sympathetic applause should he or she subsequently turn ...

Report and Interview by Loraine Alterman, Detroit Free Press, 19 May 1967

SUPER EXCITEMENT on stage. That's what Sam and Dave generate. In fact the two work so hard that by the end of a set their ...

Loraine Alterman on Pop Records: The Shattering Impact of the Doors

THE DOORS, with Jim Morrison singing lead in his urgent, compelling voice, lead you into the strange world of their music after the freaky album ...

A DOUBLE Dynamite Duo with a tradition to live up to. That's Sam and Dave – and their tradition is hit records. Hits like 'Soul ...

ISAAC HAYES and Dave Porter have written about one hundred and fifty songs together for Stax artists and also produced most of them. So far their ...

IN AN EFFORT to smash the Tamla domination of the LP market, the rival R&B giant Atlantic have put out a batch of soul and ...

Sam and Dave — soul brothers on stage — but not off

SOUL BROTHERS on stage... but not so brotherly in real life. That seemed to be the implication by Sam Moore, of Sam and Dave, when ...

ANYONE who's ever seen Sam and Dave on stage will appreciate just how hard the dynamic duo work. ...

IT STARTED out as a most exciting way to start the 70's for every British Soul lover. But after three weeks on the road it ...

An in-depth interview with Sam Moore, one part of the fantastic Sam & Dave team known everywhere as Double Dynamite. ...

AFTER 10 YEARS, Sam and Dave have finally parted company. They both intend to continue in the business, yet neither is certain of exactly which ...

AFTER less than a year apart, Sam Moore and Dave Prater – alias Sam & Dave, the Dynamic Duo – are back together. The decision ...

IF ANYTHING SYMBOLIZES the decline of the Stax Records era (recently brought to a probable close with the indictment of president Al Bell for bank ...

The Clash/Undertones/Sam & Dave: The Palladium, NYC

THIS REVIEW is being turned in weeks late, and I know why. After all these years and all these bands, all the disappointing second albums ...

Sam and Dave: The Best of Sam & Dave

Brooks & Dunn? Outkast? Big & Rich? Where are the duos of today? Sure, there are duet performances, and tons of hits by so-and-so ...