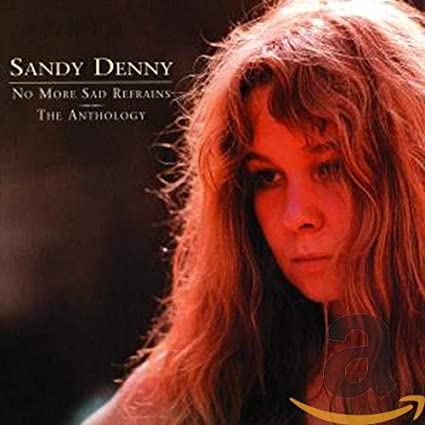 BEGUN IN LA and finished in London, Like an Old-Fashioned Waltz may be Denny's finest hour. Kicking off with 'Solo', one of her trademark piano ...

The Queen of English Folk-Rock talks about going back on the road (the repertoire, the musicians and the nerves), about her recent split from Island Records, and about her new baby Georgia.

TAKE ONE PART Fairport Convention, two parts Eclection, and two parts Poet and One Man Band, put them in a bag, stir well and allow ...

Sandy Denny: The North Sea Grassman and the Ravens (Island)

WE ALWAYS knew Sandy Denny had the capacity to make a brilliant record, and we were right. ...

PERHAPS I was expecting too much from Sandy Denny, or maybe I wanted too much, but I'm afraid her concert at the Queen Elizabeth Hall ...

THERE SEEMS to be a line that lady singers have to cross before they begin to exhibit real soul. The transition also seems, to many, ...

After playing a Greta Garbo role for three months, the leading lady of British folk comes out of her shell to talk to Tony Stewart ...

FROM THE outside the Denny residence in Fulham looks a place of tranquility. Inside, though, a different story prevails. As Watson the huge Airedale lumbers ...

THERE APPEARS to be an army of green men all over Cambridgeshire. I thought it odd, at first, that every pub in the county should ...

Sandy Brings Out The Tears

"SANDY DENNY really draws ‘em out", exclaimed Al Stewart, surveying the sea of well-known faces who had assemble at the Howff to see Britain’s number ...

THE SINGER/SONGWRITER boom is still rolling merrily along, but some of the most brilliant artists in the genre have failed to break through thus far. ...

Sandy Denny in the Talk-In

SANDY DENNY and Trevor Lucas were at their Fulham flat watching the test match when I arrived to tape the talk-in. England’s terrible plight was ...

SANDY, FROM HERE on you can do no wrong as far as I am concerned. On Monday at London's Howff you did what I've always ...

ALL IN ALL, it's been a funny sort of year for Sandy Denny. She hadn't performed in this country before last Christmas though she's worked ...

THIS IS THE ALBUM we have been waiting for since Sandy left Fairport Convention for the second time at the end of 1975. Over six ...

SANDY DENNY looked radiant. Yes, one is always supposed to say that about ladies when they're pregnant, but in this case it was true. She ...

IT'S TAKEN Sandy Denny quite a while to take the plunge as a live solo performer but hopefully the reaction she received from the Sound ...

NOTHING AS simple as a "greatest hits" collection from the Bob Dylan of 1985, of course. ...

Sandy Denny: Who Knows Where The Time Goes (Island)

WHEN SHE DIED I was still preoccupied with the politics of holey jeans and why the Ramones were the perfect emblem of the beast Modern ...

AT THE RISK of winning an all-comers hyperbole award, I shall begin and end by stating that Sandy Denny was the greatest female singer/songwriter Britain ...

Revered by everyone from Frank Zappa to The Spice Girls. Led Zeppelin's one and only guest star. One of Britain's greatest singers. Yet her true ...

FOLLOWING the Fairport Convention reunion that produced 1975's Rising For The Moon, Rendezvous was Denny's last LP before her death from a brain haemorrhage in ...

DENNY'S SECOND solo set, produced by boyfriend and Fotheringay graduate Trevor Lucas, was a decided improvement on her great but scattered debut. Evenly balanced between ...

Sandy Denny: The North Star Grassman and the Ravens

TO BILLY CONNOLLY she was "one of the angriest women I ever met", while Island press officer David Sandison recalled her as a "belligerent and ...

Sandy Denny & The Strawbs: All Our Own Work

A monumental box for a great voice. ...

Report and Interview by Andy Gill, Independent, The, 14 October 2011

Folk-rock pioneer Sandy Denny left a wealth of lyrics that have inspired the artist's new album. ...

Sandy Denny: The Battle Of Evermore

Report and Interview by Kate Mossman, Word, The, April 2012

The Sandy Denny tribute show is expanding, a long-running fight to "give her songs a future". ...

Sandy Denny: The Queen of Fairport

Retrospective by Nick Coleman, Independent on Sunday, 6 May 2012

LESS THAN A decade ago a retrospective CD box-set came out. A Boxful of Treasures documented the life and career of the English singer-songwriter Sandy ...

WHAT, HYPOTHETICALLY, would have happened if Sandy Denny had tried out for The Voice UK? Would Rita and Ricky and Will.i.am and Sir Tom have ...

"I think my first songwriting influences came from somebody called Jackson Frank. He's an American bloke who made one album over here just called Jackson ...