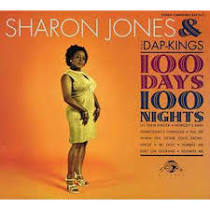 Sharon Jones & the Dap-Kings: I Learned the Hard Way

SHARON JONES WAS BRIMMING with promise as a kid in church choirs in the 1960s, as she bounced back and forth between her birth city ...

THE FIRST show to sell out at the 2011 Savannah Music Festival was the March 24 performance by the R&B powerhouse Sharon Jones & the ...

Those seeking more from their soul music than the deracinated clichés, witless hip-hop collaborators and endless credit-lists afforded by "urban" albums are hereby directed to ...

Sharon Jones of the Dap Kings is enjoying the life of the late-flowering soul diva. ...

Sharon Jones & the Dap-Kings: Give the People What They Want

Report and Interview by Paul Sexton, The Independent, 16 October 2015

Daptone Records has put authentic soul into R&B for 15 years, from Back to Black to 'Uptown Funk'. ...

Powerful soul and funk singer with the Dap-Kings hailed for her stage presence. ...

WHEN SHARON JONES sang at the New Orleans Jazz & Heritage Festival in April, the blue-and-white fringe on her sequined dress never stopped swaying. The ...