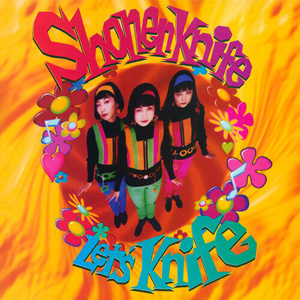 SHONEN KNIFE consists of three young Japanese women who play some of the happiest, snappiest rock & roll ever to bounce off a satellite dish. ...

WHAT REALLY puts the pop-rockettes in Japan's legendary Shonen Knife light-years ahead of such inconsequential Western frauds as "Lush" (how Shonen Knife would pronounce Rush) ...

Shonen is a Punk Locker!

LAST YEAR in America a tribute album devoted to SHONEN KNIFE came out, with all the usual suspects like Sonic Youth on it. ...

Their songs have titles like 'Flying Jelly Attack' but Shonen Knife claim it's all serious stuff. As London succumbs to a Japanese arts invasion, Nick ...

Do SHONEN KNIFE have some sinister masterplan to conquer Planet Pop or are they just a happy freakshow? STEVEN WELLS pulls on his combat fatigues ...

TOKYO APPARENTLY has a flourishing indie scene, and female trio Shonen Knife are its stars. Their popularity certainly emphasises the cultural gap between East and ...

SHONEN KNIFE are insanely cute; it's both their blessing and their curse. ...