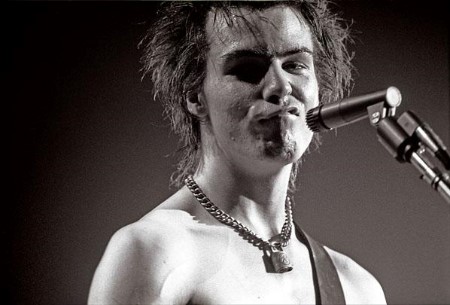 ON AN unusually busy New York rock night, the attraction of an ex-Pistol was apparently sufficient to pack Max's out for a couple of sets ...

The former Pistols "bass player" (one uses the term advisedly) talks about his version of 'My Way'; the break up of the band; The Great Rock 'n' Roll Swindle film; Ronald Biggs; planning a band with Johnny Thunders; being managed by girlfriend Nancy Spungen, and keeping his name.

IT WAS AT THE A&M Sex Pistols press conference, convened early this year, that newly appointed group bassist Sid Vicious gave his brusque views on ...

IT WAS the last day in November when the whole ugly mess finally exploded. Sid Vicious, the bass player of The Sex Pistols, had once ...

An Evening with Sid and Nancy – The Odd Couple Behind Closed Doors.

SWAYING CRAZILY, Sid Vicious clambers up off the bed. He manages the three or four steps to where, obeying live-in-lover Nancy's instructions, he removes the ...

When SID VICIOUS was at the height of fame with the Sex Pistols, be was supporting an £80 a day heroin habit. His fix cost ...

Sid and Nancy: Life In The Vicious Circle

SID VICIOUS (born John Simon Ritchie — though his mother's remarried name is Mrs. Ann Beverley) may hold the all-time record for building up an ...

WHAT MORE can we add to the pathetic, sordid tale of Nancy Spungen and Sid Vicious? ...

This is a transcription of John's audio interview with Sid. Hear it on the site here. ...

Sid Vicious: A Rocky Lifestyle Played Out to Its Extreme End

EPITAPH FOR a punk: Even before his somehow not too surprising drug overdose death at age 21, Sid Vicious already scrawled his name indelibly in ...

Report by uncredited writer, Creem, May 1979

IT MIGHT seem that just about everything's been said about Sid's death on February 2, of a heroin overdose. The newspapers reported every detail with ...

SID LIVES ON T-SHIRTS AND IN A NEW FILM, BUT MOSTLY HE JUST LIVES ON IN INFAMY ...

SID AND Nancy, Alex Cox's film about the life and death of the Sex Pistols' bassist, Sid Vicious, and his girlfriend, Nancy Spungen, is a ...

Obituary by Peter Silverton, The Observer, 1996

No one knows exactly when Ann Beverley died. Even the South Derbyshire coroner wasn’t detained by that particular detail. ...

Pete Silverton was busy celebrating his 21st with aunties and uncles, and the promise of a pewter mug. Then who should turn up but Sid ...

They're mad, bad and dangerous to know, and the apple of their mothers eyes. Caroline Sullivan examines the closest of all relationships... ...

John Mendelsohn catches up with the late Sid Vicious

TWENTY-FIVE YEARS after the fact, it appears less and less likely that Elvis's death was a hoax. Not so that of punk rock icon Sid ...

"Thank you all from the pit of my burning nauseous stomach." – Extract from Kurt Cobain's suicide note ...

Sid Vicious: "Nothing can hurt him anymore"

Sid's mother Anne Beverley died of a heroin overdose in 1996, but not before sharing her side of Sid's story. As told to Jon Savage. ...

Sid Vicious: A Star Is Born!

When Sid Vicious joined the Sex Pistols in 1977 it was the end of the band and the beginning of his metamorphosis into mythic rock ...