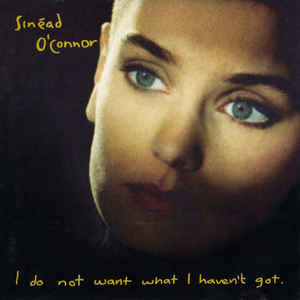 Sinead O'Connor: I Do Not Want What I Have Not Got

ON THE FACE of it, Sinead O'Connor is an unlikely person to be setting such a cracking pace into the new decade. ...

Sinead talks about "de-Enya-ing" her first album; her new album of traditional Irish songs Sean-Nós Nua; her love of American music; the cultural benefits of ethnic immigration into Ireland; the current state of Irish music; the difference between performing her own songs and covering others'; collaborating with Massive Attack and, possibly, Buju Banton!

That's how emancipated Irish singer SINEAD O'CONNOR dealt with a record company suggestion that she should 'tart herself up'. NEIL PERRY comes to terms with ...

THE IDEA of pretending it was Hazel without her wig or Tom without the gags struck me as an astronomical corker for about a minute, ...

NOT SO much a show as a filmed and videoed event, tonight is a celebration of turning 21 and at last getting a grip on ...

Sinead O'Connor: The Pluck of the Irish

"DO RICH people live there?" asked Sinead O'Connor, gazing at the hillside homes opposite her Hollywood hotel room. ...

She arrived in '87, all Doc Marten's and radical chic, disparaging those who'd helped her, declaring support for the IRA. Now there's a new Sinead ...

Sinead O'Connor: I Do Not Want What I Haven't Got (Ensign LP/Cassette/CD)

THE FIRST ONE had O'Connor screaming in a storm of icy blue. This one has a sleeve that looks like a Phil Collins album, all ...

MANSFIELD – The last time Sinead O'Connor hit town, in May at the Orpheum, her star was rapidly ascending, and she took the stage with ...

WHEN SINEAD O'CONNOR refused to allow 'The Star Spangled Banner' to be performed at her late August concert at the Garden State Arts Center in ...

LA's newest resident, Sinead O'Connor can sit and reflect on a year of dramatic upheaval. Thanks to a Prince-penned single and its arrestingly tear-stained video, ...

Sinead O'Connor: Am I Not Your Girl? (Ensign/All formats)

TORCHED BY YOUR PRESENCE, DEAR ...

The Enemy Within Sinead O'Connor

IT'S A PHILOSOPHICAL agenda that would make David Icke vibrate with envy. Consider Sinead O'Connor's current take on the state of play: 96 per cent ...

SINEAD O'CONNOR is back in Dublin, her home town, and she's in a milk stout frame of mind, blacks and whites all mixed up. Indeed, ...

Profile and Interview by Lucy O'Brien, Guardian, The, 26 April 1997

Sinead O’Connor bothers people. American audiences were outraged when she shunned their national anthem, the pop establishment was vindictive when she refused a Brit, and ...

AT AGE 30, Sinead O'Connor seems to be experiencing a rebirth with her critically acclaimed new EP, Gospel Oak, and the ecstatic reception to her ...

Two weeks after tearing up a picture of the pope on Saturday Night Live and receiving a lifetime ban from the US TV show, Sinead ...

Yet another awful week in the tabloids for Sinéad O’Connor began on April 12 with The Sun’s "Sinéad’s Shambles" headline on its coverage of the ...

The Terrible State Of Shane MacGowan

Skint, on drugs, walking a tightrope life, a young man dead in his flat: things could hardly have looked worse for Shane MacGowan. Then, astonishingly, ...

A mellow Sinead O'Connor, who describes herself as 'a regular housewife', talks about ordination, her flair for getting into trouble – and why she's more ...

ONE OF THE MOST captivating mouth-that-roared rock stars of the late 1980s/early '90s, 35-year-old singer/songwriter Sinéad O'Connor leaves as many contradictions trailing in her wake ...

Report and Interview by Will Hermes, New York Times, The, 17 October 2005

WHEN JOHNNY CASH returned to the spotlight in 1994 with American Recordings, the first in a series of records that presented him as a folkie ...

SINEAD O'CONNOR'S career to date has included at least two major artistic peaks separated, significantly, by 12 years: 1990's I Do Not Want What I ...

TRUTH WILL always out in the end. And the truth-sayers will be vindicated where once they were vilified. ...

From her public search for a husband to attempted suicide and hospitalisation, the Irish singer has had a turbulent year even by her own standards. ...

Sinead O'Connor: How About I Be Me (And You Be You)?

"WHEN I'M AN old lady, I promise you I'll write my memoirs," Sinead O'Connor tells me. They promise to be quite a tale, because it's ...

Institutionalised: The Faith and Courage of Sinead O'Connor

Though her personal life has often overshadowed her career, Sinead O'Connor remains a treasured musical force. Belatedly back on the road to promote her most ...