Slaughter and the Dogs 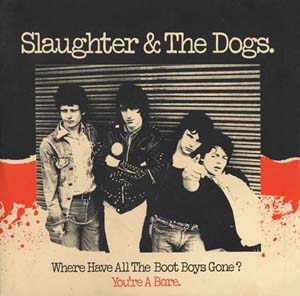 BACK IN nineteen-sixty-something, when an earlier new wave was proudly unfurling, several Live at the Star Club LPs appeared, scooping up some of the bands ...

And we don't careThe message: punk's now a business ...

SLAUGHTER AND the Dogs are not one of the great groups of our time, even by the light of punk rock. But they deserve better ...

Slaughter and the Dogs: Do It Dog Style

UNFORTUNATELY, A posthumous debut album. Quite something, not even the anti-Christ (Sex Pistols) managed to pull that off. But it is a rather sad, inevitably ...

Slaughter and the Dogs: The Boot Boys Are Back In Town

Slaughter: Get Ready To Do Ruck Steady

THREE MONTHS into the weighty Eighties and pop paper medics decide it's time for Slaughter's funeral. ...

Slaughter and the Dogs: Leper Messiahs

Formed by two young Bowie fans, Slaughter & the Dogs' bark was worse than their bite. But, as Kieron Tyler reveals, that was before they ...