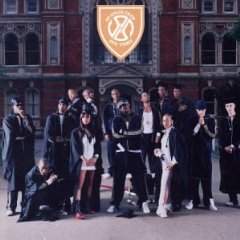 So Solid: The Crew's All Here

WITH MEMBERSHIP currently standing at twenty plus, Battersea's upsurgent underground garage crew So Solid seem to be trying to overwhelm the opposition by sheer weight ...

They Do Know: So Solid Crew

SIFTING THROUGH a pile of So Solid Crew fanmail might be a disturbing experience for anyone worried about the state of the nation's spelling, but ...

SHOTS RANG OUT and a man collapsed in a heap near the dance floor. Another lay slumped, bleeding profusely, in a doorway near the toilet. ...

WHILE, SINCE The Beatles, we British music fans have often affected insouciant confidence in the superiority of our taste over the rest of the world's ...

IN THE TOP floor of the London bus that is taking me to interview fast-talking UK garage heartthrob MC Romeo, an effervescent group of black ...

They raced from zero to inner-city heroes in one summer, then stalled in scandal. But don't write off So Solid – there's a serious business ...

The Streets: The British Can't Rap, Haven't You Heard?

THE BRITISH have always had a flair for taking black American music, giving it a twist and then exporting it back, stylishly repackaged. Blues, R&B, ...

DOES HIP-HOP glamorise gun culture? It depends who you ask. Guns have been part of the baggage of hip-hop since 1988, when Los Angeles's NWA ...

So Solid Crew are back to give us hip-hop with a social conscience, says Angus Batey  ...

Dizzee Rascal is the first artist to score two five-star MOJO reviews with successive albums. Yet Britain's freshest music star is only the most visible ...

So Solid Crew: 'What We're Doing Is Bigger Than Music'

After a dramatic rise and a messy, destructive fall, So Solid are back. This time they intend to keep the tunes – and the money ...