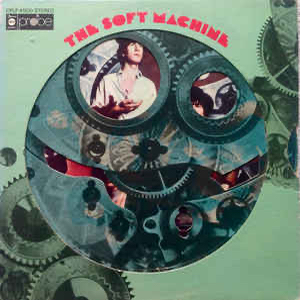 IT WAS a surprise to see so many people in the heat and the gloom of the Hamersmith Palais to see Soft Machine, because in ...

IT ISN'T SO cool to rave about your own party, but the IT Rave-Up at the Roundhouse two Saturdays ago was such an event we ...

AS FAR as London is concerned, the hippies' paradise known as U.F.O. — stands for unidentified flying object, the non-own-up official term for flying saucers ...

I have given over my column this week to my daughter Camille Russo. She  is almost 17, and has a good ear, has studied the ...

SEVERAL exotic people were sitting on the floor at an Indica Gallery opening in 1966, the tall one with the Dr Strange cape was called ...

"INDEPENDENCE" and "freedom" are words much used today to justify any act from dossing down in Piccadilly to running naked through Trafalgar Square, but Soft ...

IT SEEMS to me that this just might be Soft Machine's year. Having done things the unconventional way by finding first fame on the Continent, ...

Robert Wyatt: A Child of the Pop Scene

ROBERT WYATT is the member of the Soft Machine you're most likely to be watching while you listen to their music. Tousle-haired and athletic behind ...

THOSE WHO imagine that Ronnie Scott is selling out by inviting the Soft Machine to play for a week at his club are in for ...

Soft Machine: Inside the Mind of a Machine

ORNETTE COLEMAN'S presence in the audience was no coincidence — there's mutual admiration between the CBS group and the avant jazzman. It's also apparent in ...

PINK FLOYD and Soft Machine stunned fans with two sensational shows at London's Rainbow Theatre on Sunday night. It was a splendid evening of rock-co-operation, ...

It begins with a blessing (but ends with a curse)Making life easy (but making it worse)... ...

CLASS OF '61 at the Simon Langton School, Canterbury – an exclusive, private establishment for the sons of local artists and intellectuals. Very free, emphatically ...

Soft Machine, part 2: The End of an Ear at the Proms

IN LAST week's issue, Part One recounted the history of the Softs from their schooldays to the break-up of the group following the recording of ...

WHERE THE HELL is Lou Reed?Good question, if a trifle academic, but eminently suited for whiling away times in the coach by discussing. ...

AN INTERESTING booking, Kevin Ayers – one of the founding members of Soft Machine – playing on the same bill as their present, 14th, line-up ...

BACK IN TP 16 Myron Bretholz wrote a lengthy run-down of the life and times of Kevin Ayers, English eccentric, banana artiste and wine connoisseur ...

The Things You Should Know About Robert Wyatt

IT'S DIFFICULT to call it more than coincidence. ...

Who Was That Masked Voice?

So what if Elvis Presley isn't available for commercial breaks these days? Just get someone in who can impersonate him — the Hofmeister bear, for ...

Oh what larks they had. Psychedelic poesy with a May Ball beat. Jolly Japes with Jimi Hendrix. Frolics with the Floyd. Soft Machine: a very ...

We Have Lift Off!

In less than one year, London's UFO (pronounced "you-foe") club became the nocturnal haunt of the '60s counterculture, gathering place for the Beatles, Stones and ...