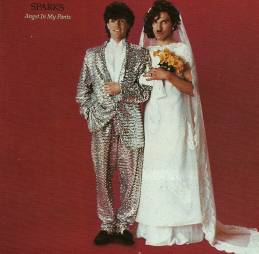 Sparks: Angst in My Pants

SPARKS' HIT STREAK in the mid-'70s produced America's best Anglophiliac rock ever – so good, in fact, that English teenyboppers made them tops of the ...

The more severe-looking of the duo runs down the band's history, song by song. Oh, and talks about being banned by French TV for looking like Hitler!

The pretty half of the eccentric duo looks back to their time as Halfnelson, on food stamps and playng American Bandstand; their Anglophilia; moving to England and signing to Island. Then he takes us through their extensive discography — the songs and associated stories.

In New York City, Rock has Created Things that Reach from Obscenity to Musical Vomit

I ONCE found myself involved in a curious argument with one of Detroit's more-respected rock writers concerning his contention that Sparks were dangerous to the ...

IT HAD TO BE said. The gentleman with the black, slicked-back hair, Charlie Chaplin moustache and thoroughly English cricket pullover, in no manner resembled a ...

TALK ABOUT BEING short changed! The way I heard it, these Sparks whizz-kids take great pride in escorting the press cognoscenti to the finest hostelries ...

Come Into Marks And Sparks

LOOK AT those two, aren't they cute? Who are they? Why they're the Mael Brothers. You know, Ronnie's the one who looks like a crossbreed ...

Sparks vs. Sweet: The Battle for Britain

"HI", SAID dapper Ron Mael, rummaging in his shoulder bag. "Here — a present we brought back from Hamburg. It's a marzipan ham." ...

PEOPLE WHOSE tastes are rooted in the Blues did not, apparently, find what Ron Mael was doing with rock on Kimono My House either interesting ...

IT WAS a typical day in Los Angeles, hot and smoggy. 18-year-old Jeff exclaimed with glee clutching his autographed Sparks album, "They went to my ...

THINGS COULDN'T really have got off to a worse start for Sparks. First their coach broke down in Barnsley – of all places – which ...

SPARKS IS ONE of those aggregations that people seem either to be attracted to or repulsed by. For the first few months of their 'comeback', ...

LOS ANGELES – It was several months ago in London that the disc jockey on Capitol Radio, BBC's commercial rival, was revealing the results of ...

INDISCREET, THANKS to a production approach which digs a wide gulf between it and previous Sparks albums, could well win over some new fans for ...

COME OUT, come out wherever you are! It safe now! Those critics'll love yez all again! ...

Sparks: Too Much Too Soon Again

Sparks discover disco – but did the critics discover it first? HARRY DOHERTY smooths the ruffled curls. ...

The all-time weird American art-rock LP, Spark’s second album was, at first encounter, impenetrably arcane and smug. After cranking up the volume, adjusting to the ...

D.I.S.C.O. HOW many of you recoil in horror at the word? Are you one of the legion of Sounds readers who would venomously denounce it ...

THAT OLD saw about prophets without honor in their own land has a ring of truth even today, as Ron and Russell Mael, known as ...

After 11 albums over a decade of stylistic evolution, Sparks — that is, Ron and Russell Mael with collaborators — have achieved legendary status despite ...

THE BEVERLY CENTER IN LOS ANGELES is a mod-a-go-go kind of shopping mall, acres of parking, chock full of stores devoted to video equipment, "intelligent ...

Dynamic duo revamp their quirky oevre with wit and irony ...

What A Difference The Days Made: Sparks Look Back

FOR OVER 30 YEARS, Sparks have always been a glorious musical anachronism. To think that their genesis is on the American West Coast at the ...

SPARKS ARE IN London to play the Meltdown Festival at Morrissey's request. Outside in the stifling heat the capitol is experiencing its own 90 degree ...

Sparks: Talkin' About My Generator

SPARKS PUT the fear of God into preteens with their debut Top of the Pops appearance. As pretty boy Russell Mael flashed his baby blues ...

Ex-child models at war with pop convention, the siblings of Sparks are bloodied but unbowed. But what underpins their ever-baroque edifice? Brotherly love? "We don't ...

MORE THAN three decades after their child-scaring Top of the Pops debut with 'This Town Ain't Big Enough For Both Of Us', Sparks remain one ...

Sparks are to begin performing their entire oeuvre next week in Islington. Singer Russel Mael tells Nick Coleman it's like buying pork futures... ...

Sparks Are Getting Their Revenge on North America

NOTE: A different version of this story appeared at http://www.blurtonline.com. ...