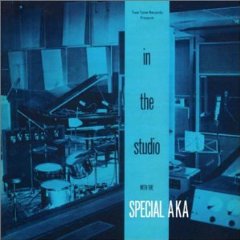 The Special AKA: The Skars Have Healed

"WHO IS he anyway?" enquires one of the tastelessly coiffeured punkettes of Jerry Dammers as the main man poses for photos in Soho's Chinatown. Jerry ...

The Special AKA: Still Special (After All These Years)

Jerry Dammers appeared on the cover of the first ever issue of THE FACE. The General, as he was nick-named then, led his group The ...

The Special AKA: In the Studio (2 Tone)

MOST LISTENERS who would snap up In the Studio own the majority of it already, as singles or B-sides. And with the release of its ...

Special Aka: In The Studio (original version)

THE 2-TONE ska era was never more than another passing Anglo hip trip in America, but the Specials represented the pinnacle of the idealistic phase ...

The Special AKA: 26,732 Hours In The Studio with Jerry Dammers

JERRY DAMMERS didn't have much sleep last night. Well into the small hours of the morning he'd been labouring over a hot Hammond organ in ...

Special AKA: New Band, Old Cause

SAN FRANCISCO: Jerry Dammers, leader of the Special AKA, is a very idealistic man. He believes, for instance, that popular songs can change the way ...

The Special AKA: Jerry Can

JERRY DAMMERS cut himself with a razor this morning. A short tear of paper covers the wound just below his equally brief right sideburn. ...

The Special AKA: Memoirs of a Survivor

Few artists are entitled to hold their heads as high as JERRY DAMMERS. He hasn't yet managed to free Nelson Mandela, but Dammers has managed ...

Jerry Dammers: A Ghost From The Past

THE MAN WHO created 2-Tone, Coventry's own Motown, and wrote Britain's most perfect fusing of politics and pop, the single 'Ghost Town' by his great ...

Jerry Dammers: Booted Out of the Band I Founded

Jerry Dammers talks about his exotic new project – and why he wasn't part of the Specials' reunion. ...

IT WAS A PARTY staged to express solidarity with the world's most famous political prisoner, while concurrently expressing vehement opposition to an overtly racist system ...

IT WAS A party staged to express solidarity with the world's most famous political prisoner, while concurrently expressing vehement opposition to an overtly racist system ...