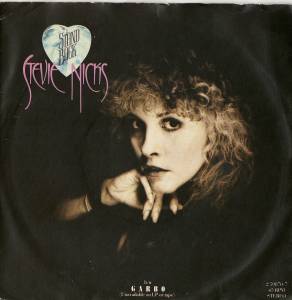 CURLED UP on the sofa at Fleetwood Mac's Los Angeles rehearsal studios, Stevie Nicks looks every inch the ageing rock chick survivor. At her feet ...

TO STEAL from Groucho Marx (after all we're talking nicks), the trouble with doing interviews is having to sit down next to someone you don't ...

SINCE SHE FIRST EXPLODED ON THE ROCK SCENE IN 1975 AS THE SEDUCTIVE FOCAL POINT OF FLEETWOOD MAC, STEVIE NICKS HAS BEEN AS MUCH AN ...

Report by Frank Tortorici, Addicted To Noise, 13 May 1998

IN A CROWD of 500, you could count about 200 look-alike, sound-alike, dress-alike Stevies. But there's only one Stevie Nicks. ...

Fleetwood Mac's full-pelt excess and partner-swapping made for rock's most incredible soap opera. But there's one question everyone wants to ask Stevie Nicks. It concerns ...

STEVIE NICKS – the fairy queen singer in Fleetwood Mac – is in a Melbourne hotel room ready to go off to another rehearsal. In ...

Thirty years after she sold her soul to the devil and, with Fleetwood Mac, set new records for rock'n'roll overindulgence, Stevie Nicks has somehow lived ...

The Q Interview: Stevie Nicks: "I had to be strong otherwise I would never have gotten through all this."

Interview by Sylvie Simmons, Q, May 2008