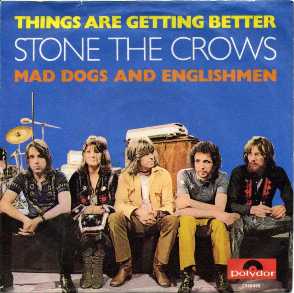 Stone the Crows: Fire and soul from the Crows' nest

AFTER JULIE Driscoll and Christine Perfect, who is going to be the next British female blues singer? Tiresome, boring question? Not anymore because her name ...

Roy Hollingworth talks to the girl with the hottest new voice in rock... ...

MAGGIE BELL, with a lot of help from her friends in Stone The Crows, turned what could have been a disappointing evening at the London ...

FROM THE first track on this third album from Stone The Crows it is obvious where their roots lie, in good time rock and R&B; ...

Brash Tales of Stone The Crows

LIFE AS a rock star isn't all glamour. It's a hard, gruelling existence which too often can end in tragedy. ...

LONDON — "Somebody leaped out at her from behind some bushes in our driveway," explained a seething Lieut-Col. Michael Underwood, "and gave her a black ...

MAGGIE'S MIRACLE — THE SURVIVAL OF STONE THE CROWS ...

Stone The Crows: Maggie May

ON THE fringe of unassuming Dunstable, Beds., Queensway Hall crouches like an errant space machine — an impressive spectacle and very expensive. It's at least ...

I STILL CAN'T BELIEVE that this album hasn't sold 87 million copies. The Crows are one of that select handful of red-hot live bands who ...

STONE THE CROWS are hardly a well-known band here. Whether this is due to the hard heart, but quite undeservedly so, of radio programmers or ...

"STONE THE CROWS!" shouted legendary manager Peter Grant, when he first heard this splendid young Scottish band roaring into action. Although it was the Londoner's ...