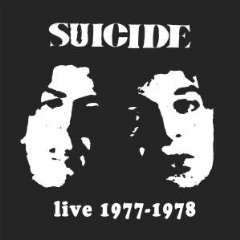 DUE TO an allergy to cats, Martin Rev is forced to huddle next to an open window in manager/producer/believer Marty Thau's feline thronged apartment. ...

The pioneering electro duo discuss the significance of their name; their respective musical backgrounds; how they've changed since 1972; set lengths: long vs short; their desire to make video discs; their need for a beat, and using drum machines rather drummers; re-recording 'Rocket USA'; people starting to like them, and their bafflement at getting applause.

After a brief chat about touring with the Clash, Alan Vega and Martin Rev go back to how they first joined forces; Martin's jazz roots; their electronic predecessors the Silver Apples; being "punk" before Punk; their relationship with New York City's music scene and not being druggies; the name Suicide; their music as confrontational; their use of electronic instruments; their lyrical concerns; their second album, produced by the Cars' Ric Ocasek; their innate futurism; DIY and the future of recording and distribution.

Messrs. Rev and Vega discuss their legendary status and regular rediscovery; look back at their formation and NYC context; discuss their technology and methods, and contemplate their place in the greater scheme of things.

In New York City, Rock has Created Things that Reach from Obscenity to Musical Vomit

Suicide Note: "The thought of suicide is a great consolation; with the help of it, one has got through many a bad night."– F. Nietzsche ...

Suicide is a solution ...

SUICIDE? PERHAPS; rather life at one remove, through a one-way mirror. Or wilful withdrawal from the sea of impossibility... ...

Suicide Is Not The Answer

Form a band instead and drive others to it. PAUL RAMBALI Checks Out The Odd Couple From The Big Apple ...

METZ: SOURCES inform it to be located some 20 miles east of Paris, France. Or two hours of sky from Luton, England, as it proved ...

NEW YORK/NEW WAVE NO INTRODUCTION ('COS OUR AUTHOR DIDN'T WRITE ONE) ...

NO TWO ways about it. All I can do is echo and re-emphasise Chris Brazier's sentiments in MM of two issues ago: the Clash are ...

IT IS TO BE hoped that some of you lemmings may have taken a little time out from adoration of the Clash on their current ...

TIME HAS come today. Third of four Music Machine gigs and – surprise! – the ritual bottling of Suicide appears to have been omitted for ...

TEN YEARS ago in a dingy New York loft two blokes were whipping up formidable walls of sheer, pulverising sound using just a set of ...

Interview by John Tobler, ZigZag, May 1980

NEW YORK'S a lonely town when you've never been there before, and you really don't know too many people (although being there is a problem ...

EVERY NOW and then, we critics drop our objectivity – believe it or not – become emotionally involved with a band. For slightly over a ...

Suicide: Suicide As A Way Of Life

"I THINK," breathes the camp dwarf in the sweatshirt and stubble, "that people should only write songs about economics and sex, because that's all everybody's ...

THE ATMOSPHERE at most performances of Suicide is not unlike that which I imagine permeates a power plant in the midst of a nuclear accident. ...

A group "dripping blood and spit" ...

During the '70s ALAN VEGA switched New York on to a different wavelength. Ten years on, and he's seemingly blown a fuse with a 'commercial' ...

A LITTLE hipper than they were when Clash fans bottled them a decade ago, the cult New York duo Suicide have reformed for some select ...

NOTE: Another unpublished piece for Bucketful of Brains from the prolific pen of Mr Jeremy Gluck, this time on Suicide's Alan Vega, written in 1988 ...

THE THING about this alarming trend of 'rock comebacks' is that the term can mean anything from the return of a bankrupt geriatric to the ...

SUICIDE'S dispassionate sheet ice of sound is a freezed-up fusillade, a remorseless puncturing of steel-hard cymbals by a psychotic, pneumatic drill. Entirely emptied of the ...

Suicide: A Matter Of Life And Death

"NEW YORK IS getting dull," says Suicide's Alan Vega. "The downtown New York of the Seventies has gone. But there's still something here, an electricity, ...

Report and Interview by Jim Sullivan, The Boston Globe, 17 July 1992

SINGER ALAN VEGA has been explaining how the moniker of his progressive synth-rock duo, Suicide, was never intended to have a negative or personal connotation. ...

IN MANY ways. A Tribe Called Quest are one of hip-hop's best-kept secrets. Their debut album, People's Instinctive Travels... remains one of the defining moments ...

LEAVING THE house shrieking with manic glee at the sound of a band being booed off stage 20 years ago for 23 minutes straight, walking ...

2-CD set coupling the electro-duo’s 1977 debut with the infamous 23 Minutes Over Brussels flexi-disc and an unreleased 1978 live set from CBGBs. ...

Interview by David Stubbs, Uncut, May 1998

Before the Chemical Brothers, before Ministry, before even Soft Cell, there was SUICIDE, the original electro-duo. DAVID STUBBS meets the synth-terrorists whose noise still provokes ...

ALAN VEGA WEARS a beret, like Saddam Hussein, Frank Spencer, and the French. He wears sunglasses on a rope, like Dame Edna. He wears leather ...

JULY 26, 1978: The Clash are on the third out of four nights at Camden's Music Machine during their chaotically-successful On Parole tour. Suicide, here ...

IT'S RARE to find live albums from canonical acts that don’t come swathed in mythology or creaking under the weight of their own self importance. ...

Suicide: How the Godfathers of Punk Kept The Faith

New Yorkers Alan Vega and Marty Rev were punks before punk was invented, known in the '70s for their violent gigs and raging synth rock. ...

"I've always believed there is a fine line between abstract and pure accessibility and that is what I've always looked for ... an artist who ...

IN HIS PRE-SHOW ADDRESS, frothy punk minotaur Henry Rollins is telling a story, which of course he's pretty good at. A formidable, not to mention ...

BY THE SUMMER of 1978, punk rock had lost the power to shock. The revolution that had shot an amphetamine rush into a moribund music ...

Co-founder and frontman of the confrontational electronic band Suicide ...