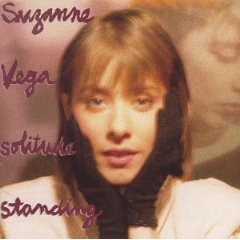 Suzanne Vega is, on her own admission, a most unlikely rock star. On stage at Sydney’s Town Hall, rooted to the spot and hung with ...

Chess metaphors, the myth of Odysseus and the woman he left behind, being a "small blue thing", and, possibly if you listen hard enough, love ...

I'D NEVER BEEN to a coffee-shop in New York's Greenwich Village before, but the Paradise was just as I'd imagined such a place to be ...

Suzanne Vega had a feeling and tried to imagine what shape this feeling would have if it had been an object. She imagined it small ...

WHO ARE the Dark People? We're told with typically elliptical detatchment by The Face that they're young Italian fatalists, spotted at parties in Turin and ...

Suzanne Vega: "I loved the idea of the solitary wanderer with the guitar recreating Woody Guthrie"

The small, shy voice of Suzanne Vega has finally found its audience. Steve Turner follows her passage from the New York folk clubs that first ...

SUZANNE VEGA's first album I found promising but irritating: the Joni/Rickie Lee persona presented with a knowing, sickly coyness. As a harbinger of the singer-songwriter ...

THE FIRST time Suzanne Vega says "oral sex" it is most physically disturbing. But you get used to it after a while. Look, she's saying ...

Suzanne Vega was brought up as a Puerto Rican, attended the neo-legendary New York School Of Performing Arts and went on to become the sensitive ...

Report and Interview by Michael Goldberg, Rolling Stone, 16 May 1991

The classy, formerly independent label tries for a comeback ...

"I can't listen to Days of Open Hand without feeling like I'm getting hives. It was such a difficult album to make, I was doing ...

THE SONG 'Bound' on Suzanne Vega's quite brilliant new album, Beauty & Crime, finds her wondering "if you might still want me". ...