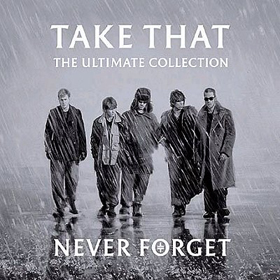 Teenybopper bands were once besieged by fans wherever they went. The new generation's tame in comparison. Why? ...

"TAKE THAT are the best group in the whole world. So there!" ...

Take That and Parody

Pop is being manufactured like never before — especially cute-white-boy pop. As the war between champs TAKE THAT and challengers BAD BOYS INC hots up, ...

There was a time when sex in pop meant a shuttlecock down the jeans. The days of innocence are over. The steam age has begun. ...

Take That: Nobody Else (RCA)

Review by Caroline Sullivan, The Guardian, 5 May 1995

THE TEENY horrors' recent attempts to grow up have been partially successful; the newly-acquired dreadlocks are frightening rather than alluring, but their third album is ...

Then There Were Four — Take That: Manchester Arena

Caroline Sullivan on how a Robbieless Take That fare at Manchester Arena ...

Robbie Williams: The Wild One

Robbie Williams was always the cool one in Take That. His appearance at this year's Glastonbury, dancing onstage with his mates Oasis, only confirmed that. ...

There is life after Take That. Robbie Williams, the lad who broke ranks (and rules), is growing up. Dave Simpson finds him talking politics, paparazzi ...

Think of Take That as a magic bus — another, bigger and brasher, will be along in a minute ...

That That have split. David Bennun laments the passing of the "greatest pop group in the world" ...

IT IS HARD to believe, but there are children young enough not to remember last year's Blur v Oasis wars. Children who will have to ...

Gary Barlow: Gary Takes it All

The least fancied member of smash-hit boy band Take That was the one with the bona fide music training. Now, Gary Barlow is writing songs ...

He was known as the cute one, the member of Take That most likely to adorn pubescent girls' bedroom walls, the one who sang and ...

Take That: That Was Then, This Is Now

Two years after the split, the Take That boys are more famous than ever — and no longer just for the excesses of Robbie Williams. ...

SADLY, POP BANDS NEVER come to a happy end. And the bigger the band, the more painful the split. ...

AND SO it is, Take That are resurrected. A pop band reborn. Not just with an anniversary exploiting greatest hits and a reunion tour, but ...

The Brits 2007: Live and Everything

Take That: Stadium of Light, Sunderland *****

Live Review by David Bennun, Mail On Sunday, May 2011

YOU CAN TELL it's a chilly evening in Tyne and Wear. Some of the women even have their shoulders covered. It's the first night of ...