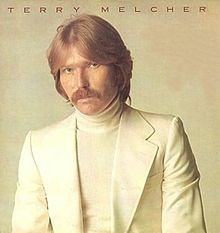 I SUPPOSE YOU could call Terry Melcher's long awaited solo debut an extension of California rock and the "West Coast Sound." After all, he was ...

Confessions of a Byrd Watcher

Surf's Up! Terry Melcher's Nightmare Is Over

LOS ANGELES – Terry Melcher, a consistent professional, has participated in scores of hits with artists as diverse as Frankie Laine and the Byrds. Seven ...

THIS ALBUM is definitely not for everyone. Terry Melcher, once the producer of the Byrds and Paul Revere and the Raiders, has released an eccentric ...

ONE OF THE most influential and talented Californians to prosper during the '60s sun-speed-surf period in pop was Terry Melcher. As producer and (teamed with ...

Hi, I'm, ummm, TERRY MELCHER and, ummm, say, did you hear the one about Elvis Presley, ummm, The Beach Boys and, ummm, oh yeah, Jesus Christ?

WHEN THE FOLLOWERS of Charles Manson murdered Sharon Tate, the pregnant movie-actress wife of movie director Roman Polanski, on Aug. 9, 1969, it was Plan ...