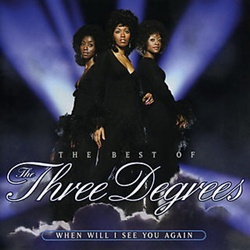 The Three Degrees: Higher and higher with the rising Degrees

HAVING EXPERIENCED the full force of thelr dynamic and sensual stage act only a few days before, I half expected to find the Three Degrees ...

Soul Single of the Year: 'Rock Your Baby'

IT WAS the year's summer sound — a sort of black funk Lovin' Spoonful — which for a short time wholly captured the imagination of ...

THE MOST successful banner carriers on behalf of the Philly Sound are undoubtedly the beautiful and talented Three Degrees, Sheila Ferguson, Valerie Holiday and Fayette ...

IN THE realm of female groups today, you would be hard put to name any set of ladies who can emulate the current popularity and ...

The Stylistics: 'Chitlins In A Basket' Special

TEN YEARS from now, some Nick Lowe with perfect recall will mimic the sound of Giorgio Moroder; for it defines and will come to represent ...

IF YOU'VE got it, flaunt it, someone once said. The Three Degrees flaunt it, but I'm not sure they've got it. Well... if you like ...