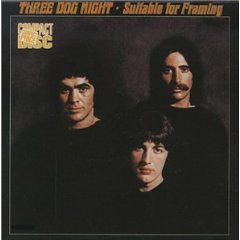 First Dog Hutton takes us back to the heady '60s days on the Sunset Strip, hanging out with Van Dyke Parks, Brian Wilson and Lowell George, and Three Dog Night.

Three Dog Night: If You Encounter a 6-Foot Frog

I HAD NEVER been to Dallas. I had not been opposed to going to Dallas. It just was not one of those places I had ...

YOU'VE HEARD about "Ship of Fools". Now let me tell you about the "Flower Flight" — a far-too-early plane that flew to Dallas recently for ...

The More Successful You Get, The More Equipment You Get, So Teams Are Needed To Get Everything From Place To Place

THEY ALSO SERVE WHO ONLY LIFT AND HANDLE... ...

FOR THREE YEARS now, the critics have been laying into Three Dog Night for a variety of mostly hard-to-fathom reasons. But nobody, evidently, has been ...

ACCORDING TO AN ever-increasing pile of Levinson-Ross press releases at my right elbow, this has been quite a summer for Three Dog Night. Their heralded ...

It was on a Friday night during Doctor Zimmerman's group therapy session that Danny, Corey and Chuck first made a breakthrough at the South Cal ...

IT WOULD BE an amusing little taskenheimer indeed for some rock-oriented socio-anthropologist to work out exactly why Three Dog Night were at one time The ...

THIS ALBUM clearly marks the demise of Three Dog Night, actually if not yet officially. It's the latest and worst in a series of terribly ...

"JEREMIAH WAS A BULLFROG!" That odd, simple and urgent declarative sentence from Three Dog Night's 'Joy to the World' is one of the most famous ...

Chuck Negron, Pt. 2: "I Would Love to Sing Harmonies With Those Guys One More Time"

WHEN CHUCK NEGRON comes to the Stafford Centre tonight at part of the Happy Together '60s-music package tour, he says it will remind him of ...