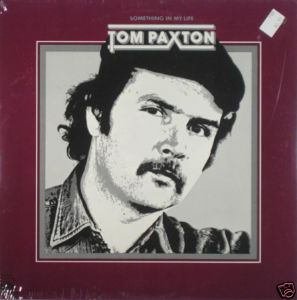 Beaulieu — a real triumph thanks to the downpour ...

AS HANK Locklin's recording of 'The Last Thing On My Mind' climbs into the charts, the man who wrote it, folksinger-writer Tom Paxton, is back ...

A TRIUMPH — there is no other word for the reception Judy Collins and Tom Paxton received at the Royal Albert Hall on Friday. The ...

A Double Triumph For Elyse Weinberg ...

VISITORS to the 2nd Isle of Wight Music Festival at Godshill near Ryde more than doubled the population of the Island, outnumbered the 130 local ...

THERE can be few artists who have made such a lasting impact on the contemporary music scene as Tom Paxton. Inspired originally by such hard ...

Tom Paxton: Something In My Life (Mam)

THIS IS PROBABLY the most undistinguished album Paxton has ever made. Maybe it's no coincidence, but his first album on the same label as Gilbert ...