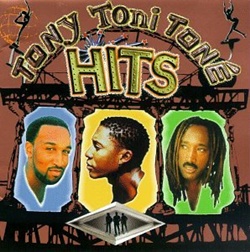 US hitmakers Tony! Toni! Tone! look to the "tougher" sound of London for continued success ...

Basking in Soul's Past Glory ...

THERE ARE many unspoken rules in pop. One is that you can tell how important a group consider themselves to be by the number of ...

I'M A FAN of the Tonies... what they stand for, the music they make, the whole tongue in cheek element; their acknowledgement of Northern California's ...

"WE GOT one little trick we use when we're making records," says Tim Christian Riley. Tim and his cousins Dwayne and Raphael Wiggins comprise the ...

Report and Interview by Simon Witter, The Sunday Times, December 1993

SAN FRANCISCO'S Oakland area has a history of producing great, energetic groups - from Sly & The Family Stone and The Pointer Sisters to Hammer ...

Report and Interview by Paul Sexton, The Times, 29 November 1996

Graphic sex is out and good, old-fashioned lurve is in for America's latest soul stars. Paul Sexton meets some of them ...

The trio who helped resurrect the true soul sound say their stunning new album might be their last. Are the brothers going to work it ...