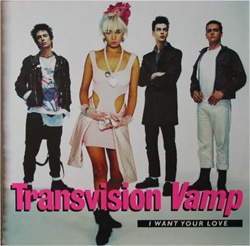 Transvision Vamp: The Little Magnets Versus The Bubble Of Babble

AS THE DIFFICULT QUESTIONS mount up for Wendy James, it's a bitter irony that Truth Or Dare: In Bed With Madonna has arrived to emphasise ...

Transvision Vamp: "I Don't Care If Everyone Hates This LP"

Pah! She does really! Because even rock'n'roll rebels want to be rich and famous and adored by everyone. It's why Wendy James and Transvision Vamp have ...

Shy, unassuming Wendy James and her pop terrorists TRANSVISION VAMP are back from a year's sabbatical with a new single and a big box of ...

Exploiter or exploited? Rock Bitch or just bitched at? Either way Wendy James just lurrves the attention – and the dosh. Betty Page probes for ...

Transvision Vamp: The Little Magnets Versus The Bubble Of Babble

IT'S A FOOL who writes anyone off, but the supposedly triumphant return-to-the-fray that was the single '(I Just Wanna) B With U' barely penetrated an ...

Wendy In Neverland: Life After Vamping

IT WAS ALL looking so good for Wendy James in the spring in 1991: endless magazine covers, review copies of The Little Magnets Versus the ...