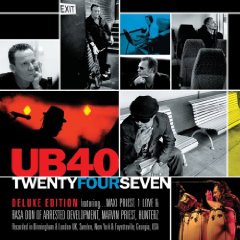 UB40, A MULTIRACIAL reggae group whose name derives from the code on British unemployment cards, emerged from Birmingham in 1980, right around the time the ...

HOPEFULLY, UB40 will help English reggae slip sneakily back into its true direction. The effects of the past 12 months of 2 Toned overkill are ...

THE UB40 TEAM met in a caff, the Wimpy opposite their office in central Brimingham. In fact Ali, Robin and Brian had arrived ...

UB4O: Unfortunately, We Were At The Woolwich

CAN I TELL you something? I don't want to depress you by dumping my current state of mind on you, but I feel really awful ...

"UB40 is just a normal bunch of blokes. But people ask us heavy political questions"

LESLEY WHITE is one of them ...

UB40: The Stance Is Dance

"I'D JUST love somebody to do an interview or review that had naff all to do with politics..." ...

I WAS STILL trying to figure out what UB40 had done with all the money they'd earned – there just had to be an interesting ...

"REGGAE IS JUST as much a part of my culture as it is for any Jamaican guy my age," contends guitarist/vocalist Robin Campbell of UB40. ...

After 35 hit singles and 13 big-selling Lps, UB40's secret is out – they're a load of idle layabouts! Their new album is making the ...