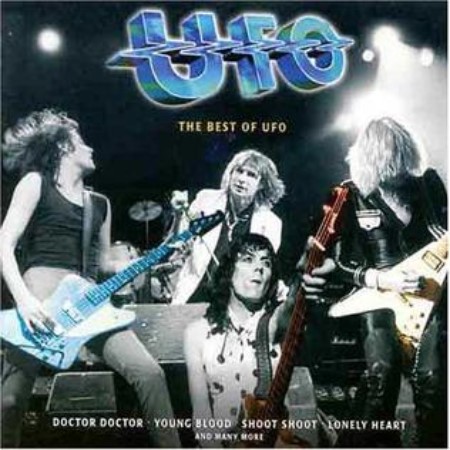 TIME AGAIN for one of those legendary matchups, a method which has in the past answered such immortal questions as: Could Eric Clapton shut down ...

"AH SO, Jim lad." The concept of a Japanese Robert Newton is hard to envisage. Yet UFO will assure you, "Long John Silver has hit ...

THEY DON'T have a Trades Descriptions Act in the States. If they did, then the Cult might be in trouble. Their ads (and, what's more, ...

UFO: Strangers In The Night: A Double Live Album (Chrysalis)

THE LESSON to be learned from this album is undoubtedly that the natural habitat of a heavy metal band is in concert. The proof comes ...

UFO: In Search Of Heady Riff

In which UFO try for world domination...HARRY DOHERTY followed them round the concert circuit ...

"UFO! UFO!" The chant blasts across the stalls, and security men blench at the prospect of a mass invasion. ...

Scorpions: Stateless and Fighting Back

German heavy metallurgists Scorpion, fronted by ex-UFO lead guitarist Michael Schenker, are set to conquer the world the English-speaking one, that is. HARRY DOHERTY talked ...

UFO: The Only Way To Travel

A MASSIVE clenched fist clutching a spanner makes an imposing backdrop for the new UFO show and inspires hopes that the band are belatedly rallying ...

Report and Interview by Garry Bushell, Sounds, 15 May 1982

Report and Interview by Garry Bushell, Sounds, 29 May 1982

REGULAR READERS of my exciting adventures may recall that two weeks back your humble scribe was snowed under with top rock band UFO in the ...

WATCHING THIS once-great band drag their bruised, battered – and in some cases surgically-enhanced – carcass around metal's chicken-in-a-basket circuit, it's difficult to believe that ...

The other day our former overlord Mike Diver phoned up DiS HQ to belligerently demand we implement what he described as "the final phase" of ...