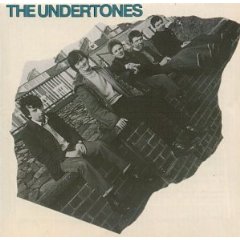 The Undertones: the Famous Five go to Finland

IN JULY in Helsinki, Finland, the only darkness you can find is inside buildings with no windows. Buildings like the "Travastia Klubi" where the Undertones ...

The mumbling Derry boys talk about pop and punk, translate their lyrics for American listeners and ruminate on what it takes to break big in the USA.

ON A NIGHT when one of the world's top bands, Ireland's favourite sons Thin Lizzy, were packing them in at the Ulster Hall, it was ...

'Teenage Kicks' Is The Undertones' EP

Crash Course in Corruption with The Undertones

Their record's bubbling under......so why aren't they bubbling over? ...

The Undertones: Putting On The Anti Style

...are the Undertones, Derry's nosethumb to the star system. HARRY DOHERTY helped them bury a few rock myths. ...

FOR SOME reason, this album reminds me of a scene in Kate Bush's live show, the part where she plays a rifle-toting trouble-shooter on 'James ...

The Undertones: The Reluctant Debutantes

Report and Interview by Paul Morley, New Musical Express, 26 May 1979

IT seemed like they were the last gigs of the year. Summer’s coming. Exam requests for DLT, college partings for Anne Nightingale, End of the ...

The Undertones, The Freshies: Apollo, Manchester

The Clash/Undertones/Sam & Dave: The Palladium, NYC

THIS REVIEW is being turned in weeks late, and I know why. After all these years and all these bands, all the disappointing second albums ...

Smash Hits Dept. of Gritty Realism presents: If This Is Tuesday, It Must Be Blackburn

David Hepworth goes on the road with THE UNDERTONES ...

The Undertones backlash starts here. Well, not really. But Dave McCullough is worried... ...

THERE IS ABSOLUTELY NOTHING special about the Undertones. They're a motley gang of Irish kids with typical imperfect faces and no visible charismatic presence as ...

A Better Mousetrap: The Undertones Beat A Path To America’s Door

Back in the primordial '70s, a rash of groups moved into the British 45 charts to occupy the places formerly inhabited by the Beatles and ...

THESE BIENNIAL all-night Rockpalast bloat-ons are comically close to the idea of a festival mentality geared to Germanic efficiency: You vill be entertained! The groups ...

PLAYING ONLY their second live date of '82. The Undertones were greeted by an ecstatic audience. ...

The Undertones: Brightness On The Edge Of Derry

The Undertones: Sounding Out Stroke City

The pop star's tale: Michael Bradley has lived most of his life in the thick of the Troubles — but he has not let them ...

The Undertones/Hypnotised/Positive Touch/The Sin Of Pride /The Peel Sessions Album ...

The Undertones: Teenage Dreams, So Hard To Beat

For the Undertones, living the rock'n'roll dream meant visits to church and McDonald's, and adopting pigeons when they could've been partying with the Clash. But ...