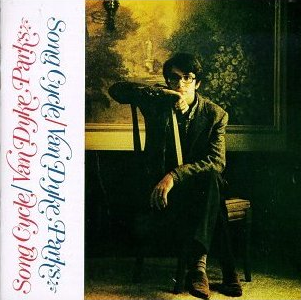 ONE DAY I got this strange note from America. It said: "Thanks for the review of my single. It is the first good review I've ...

Profile and Interview by Nick Hasted, The Independent, July 1999

VAN DYKE PARKS knows people who know. He always has. He has the CV of Woody Allen's Zelig, is in the corner of the picture ...

The great man talks about many things, including his Southern roots; Los Angeles and the California experience; acting in TV and movies as kid; his early music experiences in LA; surfing, and the Beach Boys; his first album Song Cycle; Randy Newman, Ry Cooder, Lenny Waronker, and the whole Warner Bros. Records scene; Brian Wilson, and what happened to Smile; his Discover America, and the associated lawsuit, and writing songs with Lowell George (who makes an appearance)...

Van Dyke Parks talks of his early days in Los Angeles; the folk scene; the deaths of both his brother and John F. Kennedy; on becoming an arranger and songwriter; the effects of the '60s British Invasion; the counterculture and the death of the hippie dream; being in the studio with Brian Wilson; the legendary Smile project; his own Song Cycle and much more.

WHAT FOLLOWS is an exorbitant number of words about and from an insignificant recording artist named Van Dyke Parks. He is insignificant at the moment, ...

VAN DYKE Parks might have grown old in comfortable obscurity. At 25, he had made his mark along Sunset Boulevard (California's Teflon-pan alley) as the ...

THE REVOLUTION in pop music has produced some extraordinary people. Attracting poets, jazz musicians and classical music enthusiasts, the field has now expanded into a ...

PARKS HAS been around the pop scene for quite a time — his name cropped up in connection with the Byrds and later with the ...

VAN DYKE PARKS' first album, Song Cycle, released in 1968, was a dizzyingly eclexoteric work that had the critics alternately gushing, "The emergence of a ...

Van Dyke Parks, surely one of the most inventive musical minds in the business, is definitely not for everybody. His first album Song Cycle came ...

WHATEVER BECAME of Ars Nova, the United States of America. Neon Philharmonic or the Fifty Foot Hose? Less than five years ago, "art-rock" projects like ...

VAN DYKE PARKS is one of those people who are usually regarded as either genius or idiot. ...

THE REAL genius behind the best of the Beach Boys makes a much more commercial statement than he did on the surprising Song Cycle or ...

Van Dyke Parks: The Clang of the Yankee Reaper

In rootless Southern California, the only cultural traditions are those which you create for yourself. Maybe that's why Van Dyke Parks is much beloved of ...

"He deals in streams of consciousness and clicks someone’s brain on to accepting an abstract concept... he can grab those feelings and wrench them out ...

Moving forward to the past ...

THE KITCHEN door swings open, and a tiny voice wafts into the dining room, warbling with gusto "...are the luckiest people in the world." Suddenly, ...

BH: Was it hard getting Brian involved in the making of Orange Crate Art? ...

AFTER 30 YEARS in the music business, Van Dyke Parks is not a household name. ...

The Beach Boys: An American Family: Heroes and Villains

Brian Wilson's back, recording a live album at the Roxy this week and preparing for a summer tour with symphony orchestras throughout the U.S. So ...

Wouldn't It Have Been Nice: An Interview with Van Dyke Parks

VAN DYKE PARKS was the intellectual southerner who penned the baroque, cryptic lyrics for 'Surf's Up', 'Heroes and Villains' and other Brian Wilson masterpieces. He ...

Brian Wilson: Smile? Don't mind if I do…

It was due in January 1967. But the Beach Boys' Smile LP was shelved when its creator Brian Wilson refused to finish it. Now he ...

For decades, Beach Boy Brian Wilson's unreleased album SMiLE has been shrouded in myth. Now, at last, the songs can be heard on a CD ...

Brian Wilson Remembers How to Smile

WHAT would have happened if, as planned, The Beach Boys had released the Smile album in the summer of 1967? For starters, people would have ...

BY THE TIME of his 1968 debut, Van Dyke Parks already had pedigree. Mississippi-born and Louisiana-raised, as a child actor he starred in 1956's The ...

The new album by Lowell George's daughter Inara shimmers with arrangements by Van Dyke Parks — one of her late father's best friends. They talk ...

Picture Sleeve Archive: The legacy of Doug Legacy and his L.A. Legends

The next few months will see the release of a series of vinyl singles by celebrated writer, arranger and producer VAN DYKE PARKS, plus the ...

AS THE SMALL, white-haired, bespectacled man in a sleeveless cardigan took his seat a few rows from the front of the stalls in London's Royal ...

Van Dyke Parks remains in forward motion despite the fickle tastes of the Entertainment-Industrial Complex. An eloquent raconteur and great wit, he's philosophical about the ...

Van Dyke Parks: "I was victimised by Brian Wilson's buffoonery"

Retrospective and Interview by Dorian Lynskey, The Guardian, 9 May 2013

He co-wrote the Beach Boys' Smile and now works with everyone from Rufus Wainwright to Skrillex. But don't dare to call him quirky, says Van ...

WITH A NOD to his wonderfully eclectic 1968 debut Song Cycle, legendary arranger/songwriter/producer Van Dyke Parks returns with the postcards from everywhere, Songs Cycled. Whether ...