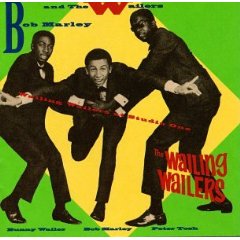 The Wailers: Catch A Fire (Island)

SOME TIME during the coming summer, Reggae will become a vital force in pop music — perhaps, for a while at least, the force. For those who ...

The Wailers: Catch A Fire

Review by Gene Sculatti, Fusion, May 1973

AFTER ALL THESE veers, a new Wailers' LP! But wait, Catch A Fire doesn't have anything to do with those soggy Seattle-ites who rocked hot ...

IF YOU FOUND the Wailers' debut Island album, Catch A Fire, an uncomfortable sidestep to your usual tastes, I'd strongly advise you to witness a ...

Peter Tosh: The Smoker You Drink, The Player You Get

Reggae: Can The Beat Go On?

THE DEATH OF Peter Tosh, gunned down Sept 11 at his Kingston, Jamaica, home during an apparent robbery, is only the latest tragedy in the ...

Bitter, violent, a few bricks short of the load, Peter Tosh was a hard man to love. Lloyd Bradley investigates the gangland connections that resulted ...

CATCH A FIRE set the world alight but Burnin’ got it blazing. By the time Eric Clapton took the album’s ‘I Shot the Sheriff’ to ...