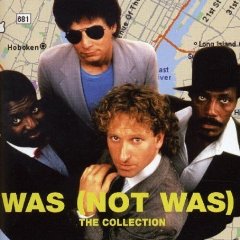 Was Not Was: Born To Laugh At Tornadoes (Geffen)

AMERICA HAS been dressed by improper minds. Corralling the year's important American records – Swordfishtrombones, Girl At Her Volcano, Burlap And Satin and Born To ...

Don and David talk about American culture, the Kennedy conspiracies, musical juxtapositions and growing up on Detroit rock 'n' roll.

Don (left channel) and David (right) Was talk about their early Detroit influences; seeing John Coltrane and Thelonious Monk; going from Island to Geffen, and Born to Laugh at Tornadoes; studio techniques and proto-sampling; their new album Are You Okay?; current American culture; singers Sweet Pea Atkinson and Sir Harry Bowens; keeping a big band on the road; comparisons with Steely Dan; becoming more cheerful than back in '81; producing Dylan's Under the Red Sky, and Don winning a Grammy for Bonnie Raitt's Nick of Time.

Was (Not Was): A Subtle Fabrication Not of the Norm

Profile and Interview by Mary Harron, The Guardian, 4 July 1981

WAS (NOT WAS) are as good an example of post-Vietnam paranoia as you're going to get. While all around them are losing theirs, Was (Not ...

Was (Not Was): Mudd Club, New York NY

WAS CRAWL OUT THE WOODWORK ...

Was (Not Was): Back Come the Freaks

Was (Not Was)'s major problem was that they could never sing. Their voices would always come out sounding freaky. To overcome this they've brought in ...

Was (Not Was): Born To Laugh At Tornadoes (Ze/Geffen)

FOR AN ALBUM that boasts such a pointedly diverse array of vocalists — would you believe Mitch Ryder, Mel Tormé, Doug Feiger and Ozzy Osbourne, ...

Was (Not Was) Just Can't Play it Straight

LOS ANGELES — They would meet on the highest bleacher seat at the high-school field. Shivering in the cold Michigan night, they would talk about ...

Was Not Was: Born To Laugh At Tornadoes

Was Not Was: All Over The Road With Two Motor City Outcasts In A Studio Tornado

ALIAS A mini-LP commemorating the finest moments of the (St) Was Bros, the saboteurs of funk. My advice would be to wheel it out, soon. ...

Was Not Was: That Was The Freak That Was

O Dialectic, says the philosopher, when he notices that perhaps the true philosophy laughs at philosophy. ...

Was (Not Was): I Love This Band, I Hate This Band

THIRTY MONTHS ago, John Neilson did a story on Was (Not Was) for CREEM. (It's the issue with Pat Benatar on the blue cover — I ...

■ Who on earth are Was (Not Was)? How did they split Wham! up? Why do they think Madonna can't sing for toffee? And will ...

Was (Not Was): Freakshow

"BOBBY Maggot was a big attorney/Through the courtroom down to hell he'd journey/Baldheaded piece of garbage that he was/He'll defend you if your money's honest/Do ...

Was (Not Was): Disco Infernal

Was (Not Was): Brothers of Invention

WAS (NOT WAS) still people their songs freaks, but compassion now nestles satire. MAT SNOW helps The Was Brothers find the heartbeat of their absurd ...

Was (Not Was): Hammersmith Odeon, London

TWO JEWISH comedians backed by the JBs. There — that's as close as anyone will ever come to describing the Wases in seven words. Unless ...

Was (Not Was): Spies In The House Of Funk

MASTERS OF funkified musical left turns, that was one way to describe Was (Not Was) after listening to their 1983 LP, Born to Laugh At ...

AS CONCEPTUALISM goes, this mutant brainchild of Dee-troit unbrothers David and Don Was is semibrilliant, taking something from everybody who ever contributed anything to the ...

Was (Not Was): Hitmen

THERE ARE SEVEN of us round the microphone, and I, for one, am a little nervous. I should be, too: three of the voices present ...

Was (Not Was): Motown Brothers

WAS (NOT WAS) make perfect pop (not poop). They also know the names of several philosophers! STUART MACONIE wants to lick the barbequed goat pizza ...

Was (Not Was): Are You Okay? (Chrysalis)

WHILE THE last Was LP was a tribute, if you will, to '70s soul, this time the beats are more current. Purists will cry sellout, ...

Far-out funksters Don and David was have worked with all the greats: The Stones, Dylan, Madonna — and Jonathan Ross. Gavin Martin caught them relaxing ...

The Was bros who weren't

Middle-class Jewish boys from Motor City, Was (Not Was) have set out to show that white men can make soul music. Bruce Dessau reports ...

Was (Not Was): Wizards Of Was

Interview by Nick Coleman, Time Out, May 1992

Until 'Walk The Dinosaur', the funky, cosmic pop of Was (Not Was) remained a cult. Now they've reached the giddy heights of supporting Dire Straits, ...

David Was of Was (Not Was) invites us into his lovely garage. Much of his collection stems from an earlier career as a jazz writer: ...

Was (Not Was): Islington Academy, London

IT'S CLOSE ON 20 years since Was (Not Was) last played in the UK, and Don Was is feeling nostalgic. "Is anybody here old enough ...

IT'S BEEN 18 years since this Detroit-born funk-jazz-pop-art collective released its last album — and the world's grown a whole lot crazier during that time, ...