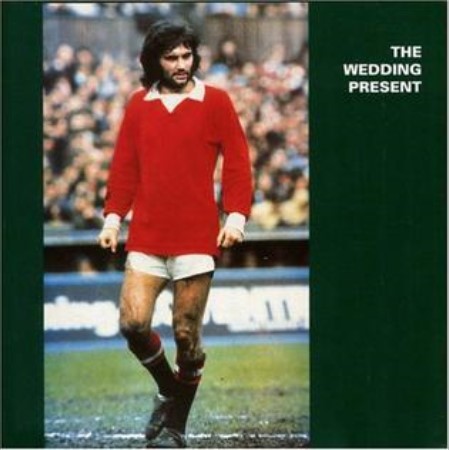 STANDING IN front of their biggest audience ever and unconcerned at being coerced into a part in indie pop's association-by-attitude amalgam. The Wedding Present are ...

THE WEDDING Present were born in 1985, achieved the level of quite exciting, and now have had greatness thrust upon them with worrying prematurity. Recent ...

DAVID GEDGE, six foot plus of gangly manhood in a vile paisley shirt, steps through the balloon infested stage and grabs the microphone with a ...

The Wedding Present: From Russia With Love

How have four normal people from Leeds become the most successful indie band of the late-eighties? Why have the trusty punksters just released an album ...

Chauffered car-rides on the record company’s account bear witness to The Wedding Present’s emergence out of indie-land’s "shambling" band scene. But for their singer Dave ...

BY NOT HI-jacking the groovy train in order to revive a flagging career, The Wedding Present now stand virtually alone amongst their mid-'80s indie contemporaries. ...

IN THE finest novel ever written by an Englishman, Keith Waterhouse's Billy Liar, our adolescent hero fantasises about leaving a thinly-disguised Leeds for London's bohemian ...

Twelve Top 30 hits into 1992, David Gedge tells VOX that indie giants the Wedding Present are "not fashionable any more". ...

THE STEEL CITY, commemorating its centenary and celebrating soccer success, turned rock capital as a week of music events, including concerts, seminars and workshops, got ...

ON RADIO recently, David Gedge claimed that the most hurtful press comment he'd ever read about himself was that he had hairy ears. Well, Dave's ...

I FELT A RUSH of nostalgically bad haircuts and Proustian army surplus anoraks while reading Alistair [Flitchett]'s consideration of C86. Nostalgia also for the days ...