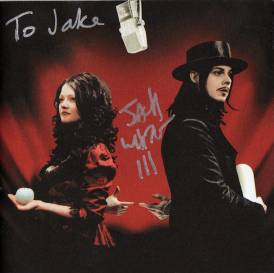 THE MOTOR CITY IS BURNING – on London's Charing Cross Road. An hilariously heraldic "City Of Detroit" flag – with a Latin inscription translating as ...

NEXT WEEK the White Stripes release their latest single, a highly distinctive reading of the Burt Bacharach standard 'I Just Don't Know What To Do ...

Backstage at the Bowery Ballroom, the Stripes talk about their stage show: what they play; what can go wrong; having Ray Davies in the audience; great shows, and disasters; hating corporate sponsorship; being in the sights of major labels; their support acts; Jack's complicated relationship with the blues; his dislike of the rock press; dealing with hecklers; rock in Detroit, and Meg's drum kit!

Jack White goes way back to his Detroit childhood, the evolution of the White Stripes, and through to his current workaholic agenda as the Dead Weather's drummer.

THE WHITE STRIPES are quite a sight. ...

The White Stripes: De Stijl (Sympathy For The Record Industry)

The White Stripes: De Stijl (Sympathy for the Record Industry)

JACK AND MEG White are the future of the very industry for which their label espouses such compassion. These Detroit-based guitar/drum siblings strip Jon Spencer-style ...

HE'S THE don of Detroit, the god of garage, the man reclaiming rock'n'roll from false-hearted cheats and whining, hollow charlatans. ...

London Loves Us: The White Stripes

DETROIT, YOU HAVE a secret admirer. Admittedly, we're not terribly local, not all of us are single, and you certainly wouldn't want to come round ...

THE CURIOUS success of the White Stripes is proof that rock'n'roll fairy tales can still happen.  ...

Revenge Of The Underground: The Strokes and the White Stripes

Is a new day at hand for 'alternative' rockers? ...

Of Strokes and Stripes: An American Invasion

LAST SUMMER THERE was a sign outside British music’s front door. It read "SITUATION VACANT", and then, in smaller print, "Wanted: the Next Big Thing". ...

THE SHORT version: Jeff Beck is still the champ. The long version: American humorist Fran Lebowitz once wrote words to the effect that vegetables do ...

The White Stripes: The Sweetheart Deal

"SPERAMUS MELIORA; resurget cineribus" – the motto of the city of Detroit translates as "We hope for better things; it will rise from the ashes". ...

THE WHITE STRIPES find out the day before this first show of their tour that Elephant, the startling beast of a record that they made ...

The White Stripes: The Special Relationship

THE PERFECT BLUEPRINT for a band devised by Jack and Meg White in Detroit obscurity six years ago has put them at rock's pinnacle today. ...

Review and Interview by Gavin Martin, Uncut, May 2003

JACK AND MEG STRIPPED THE BLUES DOWN TO ITS BARE BONES, FLESH-WOUNDING 8,000 SCREAMING FANS OVER TWO NIGHTS AT LONDON'S BRIXTON ACADEMY ...

SOME MIGHT SEE it as a generational passing of the torch: an established music icon sharing the stage with a younger rising star, and there’s ...

AT THAT POINT, after one and a half listenings, I concluded that White had heard all the Loretta Lynn records ever made and liked everything ...

EXCUSE MY misperception. I’d always considered the White Stripes as a modernist garage-rock band-hip to the melody of catchy songs like 'You’re Pretty Good Looking ...

The White Stripes: Get Behind Me Satan

THERE WAS almost a point, deep into Elephant, where you could sense something slipping away from Jack White. ...

The White Stripes: The New Generation

JACK WHITE WILL never have the blues badly enough. Though The White Stripes' new album, Get Behind Me Satan, suggests the legendary bluesman Robert Johnson's ...

YOU KNOW what they say: You are what you listen to. So what does that say about Jack White? Actually quite a bit: That he's ...

The White Stripes: Heart of Darkness

Join us for a tale of extraordinary madness as we sail through the Brazilian rainforest deep into the Heart Of Darkness. There we find the ...

The Truth In Red And White: The White Stripes' Romanticised Reality

"I SAW THIS documentary about a classical guitarist," Jack White told me recently. "He was playing Bach and Mozart, these really ridiculously complicated pieces, but ...

Paul Morley watches The White Stripes at the Hammersmith Apollo and is blown away by their impeccably skewed greatness ...

Jack White's Side Dish: The Raconteurs

THE BUSMAN'S holiday has a long if mixed history in rock. From makeshift supergroups to one-off time-killers to impromptu jam sessions, sideline moonlightings are part ...

JACK WHITE was certainly ready and prepared for the media storm that greeted The White Stripes' arrival on the international stage with their third album ...

SON HOUSE WAS one of the greatest of all blues singers. Born on a Mississippi cotton plantation in 1902, he died 86 years later – ...

Heavy Riffage! Celtic Folk! Mariachi Blues! Meg And Jack Rock Back With A "Compellingly Weird" One... ...

JACK WHITE just doesn't know what to do with himself. ...

"There's a Voice in Me Saying Slow Down": Jack White Looks Back

WE'RE COMING to the end of a punishingly intense set by the Dead Weather, the second side-project band formed by Jack White of the White ...

ON THE 18TH of August 2009, in Salt Lake City, I was privileged enough to sit down with Jack White – variously a White Stripe, ...

THERE WAS AN outpouring of grief this week when the White Stripes announced they were to split. Stevie Chick explains their magic while photographer Ewen ...