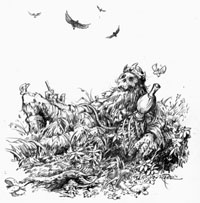 Arthur magazine was a Californian bi-monthly magazine founded in October, 2002. It focused on noise music, stoner metal, and other types of psychedelia. Originally a free magazine, it ceased publication in 2009, and then returned at the end of 2012 on a paid subscription basis, only to close again in March 2014.

Darkthrone: Black Metal: Not Dead Yet

Catching up with Scandinavia's black metalists. ...

Michael Hurley: On the Trail of the Lonesome Snock